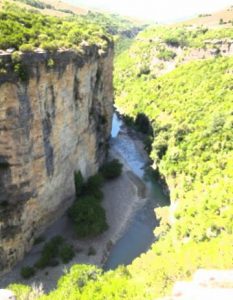 Called the grand canyons of Albania, the canyons on the River Osumi are a prehistoric, natural tunnel, which is hard to contemplate without visiting. The canyons are totally natural, one of the largest in Albania. They are located in the southern region, in the district of Berat and are valued as one of the most attractive in the Balkans.

According to European researchers, the canyons are also among the most beautiful in Europe. They phenomenon is created by the invasive and digestive forces of River Osumi, exerted on the limestone rock mass of Corovoda’s structures.

The Osumi Canyons have a length of 13 km, are 4-35m wide, and 70-80m deep, with vertical slopes. They were formed 2-3 million years ago. The canyons have underground passages and uncultivated caves. Water flows on both sides. The main vegetation around them are Mediterranean bushes.

If you decide to visit the canyons, you will be amazed by the astounding beauty, the mixture of colors, and the shadows of rocks over the river’s surface, coupled with the color of the river and sky, as well as the surrounding vegetation. Everything looks like an unreal world. There are big waterfalls with amazing views, especially under the rays of the sun, forming multi-colored rainbows. Sometimes, it is difficult to set the boundary between the earth and the sky. There are a lot of holes formed by the karst process, such as the Bride’s Cave, 7-8m in length and 2m in diameter, 800 meters in the vicinity of the Bigaz village. There may be other caves on the vertical limestone slopes that are waiting to be explored.

There are many legends about the Canyons, such as the legend of the Bride who was forced by old customs to marry her husband unwillingly. On the way to her husband’s house, she prayed to God by speaking to the rock, “Open rock, let me escape from such trouble.” The rock opened and the bride jumped off the horse, hiding in the cave. Later, the cave was visited by other brides, looking for good luck in having children. 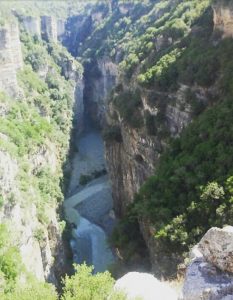 The second legend relates to the bizarre forms of the cliffs, similar to the horse’s foot and a cane. The trace is described as of the Bektashi saint Abaz Ali, who came to Mount Tomorri from Qerbela, riding on a white horse, flying over the cliffs and mountain, where he left his traces. Bektashi believers seek the help of that sacred trace to calm their soul.

Until the early 1990s, Osumi Canyons were not used for tourist purposes. But today, many foreign and Albanian tourists visit them, especially in the last five years. The canyons can be visited in two ways–via the Osumi River with canoes, kayaks or boats, or with a car, or just walking. Along the way, you can see the Kasibashi Bridge, which is a monument of our cultural heritage since the 17th century.

Sailing can be done in almost every season of the year, but the most preferred period is from April to October. Rafting trips are carried out by having your own equipment or service provided by Albanian Rafting Group, located in the city of Berat. This association also offers accommodation, traditional cuisine, and rafting guides in the canyons. A base package from Berat up to the top of the Canyons, including rafting, is 6000 ALL (45 Euros). By land, the canyons are visited at any time of the year with very little expense. The road along the Canyons is now open and the project will continue deeper in the other southern areas, such as Permet and Gjirokastra, to join the River Osumi valley with that of the River Vjosa, where rafting can also be practiced.