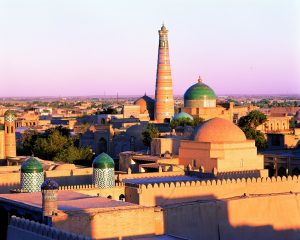 The State Committee of the Republic of Uzbekistan for Tourism Development, used with permission

Our media are inundated with stories of strife, especially from the arch of instability which reaches from the Atlas Mountains to Afghanistan. However, there are some areas where one can experience moderate and tolerant Islam, which lived for centuries in peace with Christians and Jews.

Take Uzbekistan in Central Asia, a place of ancient and glorious history, which one can discover for oneself. With its beautiful mosques, mausoleums and madrassas it lures the savvy tourist, but its secular nature provides for religious tolerance and gender equality. Here’s a little secret: Uzbekistan is still relatively unknown.

The Central Asian nation has morphed from a trading hub on the Silk Road into a fascinating travel terminus, its rich historical heritage waiting for the curious Westerner to come and visit. I’m talking about tourism with deep historic meaning that helps to understand the roots of Islam which go beyond Arabia and its radicalism. The richness of Eurasian civilization, culture and architecture is simply unmatched, a place where one can truly understand the wonderful complexity of our planet.

Perhaps the most significant example of the religious tolerance experienced in Uzbekistan is the Tomb of Daniel, located in the ancient city of Samarkand. Across the border in Afghanistan, where a brutal war has raged for almost two decades, but here Christians, Jews, and Muslims pray together where legend states the remains of the Old Testament prophet are buried. 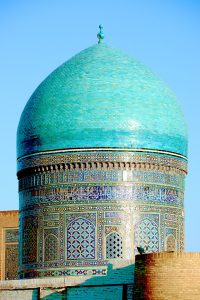 The Uzbek government has clamped down hard on radical Islam, and women are treated with more respect and less oppression than elsewhere in the region; gender being a reality. Uzbekistan is safe for female travelers. In fact, Uzbekistan is known as one of the safest destinations in the world for Westerners. With the trials of Christians and other religions in the Middle East, this is very welcome.

As many guests of the ex-Soviet republics know, the Metro system in the capital is appreciated, complete with the stations that double as architectural works of art. In addition, the air links are good. There are high speed trains made in Spain, and the highways are easy to navigate and get around the country.

The city of Khiva, located in the northeast of the country, is a veritable walled architectural museum of previous millennia, a pristine example of a thriving trading center on the old Silk Road from China. Splendid mosaics are everywhere, along with the domes and minarets ornately decorated to crown the mosques throughout the locale.

Beyond the visual arts of Uzbekistan, the Central Asian cuisine is to die for, especially the plov! Some staples, like shashlik grilled meats are mouthwatering, complete with the obligatory fresh dill, and there are many local dishes to attempt, which are well worth the adventure!

Many of the locals speak English and the hotels are nice, from the five star chains down to the local establishments.

Shopping is a must! Its guaranteed your flat will be decorated in bright colors and exotic carpets and furnishings after a trip to Uzbekistan. Perhaps the best thing about the country is the hospitality of the people. When you combine that with the security and tolerance, and the fact that the destination is still undiscovered by the mass tourist industry, the wonders of Boukhara, Samarkand and Khiva really are a must-see destination for those who crave adventure and the exotic, but within a reasonable risk. 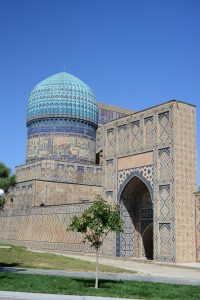 There is a direct flight from New York on the national carrier, Uzbekistan Airways. While the tourist visas are still required, in the future, the visa-free travel regime will make the travel even easier. Already, tourism to Uzbekistan has been increasing at 20% per year.

With the bad name that radical Islam has garnered over the last decade, it is important for the West to understand the Islamic past that has contributed to world society, such as innovation and science. When you travel to Uzbekistan, you will find out about the great scholars of the past, like Avicenna and Al Khorezmi. So as China looks to re-invent the Silk Road from Beijing to Europe, experience the old – before the rest of the world rediscovers this unique place.

In The Footsteps Of A Dictator, Visiting Tunisia