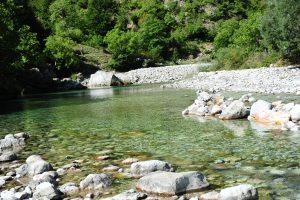 North of Albania holds one of the most beautiful tourist villages called Valbona. According to the legend, the village got its name from the Italian language. Centuries ago, when a priest climbed up over the valley and saw it from above, he called it ‘vale buona’ which stands for ‘good valley’.

The Valbona river, which runs through the valley, is known as the river with the most crystal water of Albania, bursting with turquoise. Valbona can be found 26 kilometers from the city of Bajram Curri which is the main center of Tropoja region. To reach out the city from Tirana there are three main options.

The first alternative is to drive to Koman lake and then catch a boat to reach the village via water. The sight that such a trip offers is so impressive that it would be hard to forget. The green water runs through the high mountains and the broken and wild terrain offer an exceptional view of nature with colors that differ every season of the year.

The second option would be to get to the village entirely by car through Kosovo. Initially, one should get in Kosovo through boarder control at Morina in Kukes and then re-enter Albania through the boarder of Qafe-Morina, which connects the city of Gjakova with the city of Bajram Curri. The road is newly built and the maps are updated on google maps.

A third possibility would be to drive through the mountain that connects Has with Tropoja, however the road is not well maintained and is not a comfortable drive.

Valbona is a small village of only 30 ‘towers’, characterized by their construction with stone walls and sloppy roofs that prevent the vast amount of snow from resting over them during the cold winter which can last 4 to 5 months. The windows of the towers are called ‘frengji’ and are built this way since ancient times around the house with the intent of protecting from invaders. According to the locals, the village is 400 years old and the predecessors descended from the village of Vuthaj in Kosovo. 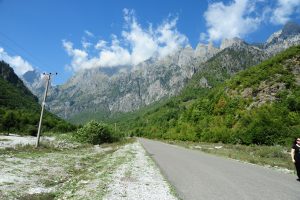 Why is it worth going to Valbona?

Valbona is sheltered in a valley that looks like a river. Although between the Alps, it is actually 810 kilometers above sea level. The climate is good and there is no moisture. In summer you never feel the heat and it is advisable for anyone who needs to treat their lungs from the dirty air of the big cities. Valbona is also a village whose name was given to many Albanian girls, some of which probably will never visit it in their lifetime. To go up to the village of Valbona you have to walk a twisting path through the mountains. For any traveler, it is advisable to stop for the views in the gorge of Dragobi, whose landscape is fabulous. The road is sometimes accompanied by giant walnuts, and they don’t disturb you if you stop to pick some fruit directly from the tree. There are plenty of things to do in the valley if you want to walk in the mountains. You can go to the waterfall of Rragami in the watery season. During the months of July and August, the water is vastly reduced and the only thing you can enjoy is the amazing landscape. Hotel rates are cheap of any American or European traveler. The price per person does not exceed $15, if you share a room with some others, while if you choose to sleep in the towers called guest houses, the room rate does not exceed $40. A meal does not cost more than $15, while breakfast with fresh bread, eggs, fresh village butter, and jam does not exceed $5. Food is organic, and the most consumed cheese is that of goat, since the village has many flocks of such livestock that enjoy the abundant food offered by nature. During the day you can visit the village mill and go to Xhema Lake with its emerald water. 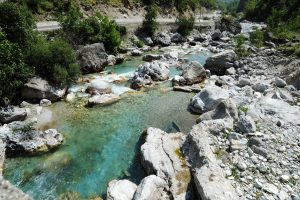 During the month of September you can eat blackberries that are alongside the road. If you want to walk you can go to Theth on a difficult journey that lasts almost 9 hours. To enjoy Valbona and its beauty you should spend at least three days. You will get tired from the difficult terrain during the day, even though in the evening the village does not offer activities. If you choose to sleep at the hotel in the Gjësë field, you will have the chance to spend the evenings in a warm atmosphere where large groups of tourists can enjoy dancing or dinners at large and noisy tables. 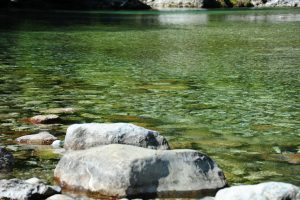 During the summer, many people climb up the mountain. If you are having a night on the cold mountain and don’t have an umbrella and thick clothes to wear, or a fire to heat you up, you can ask the residents to shelter you. Do not leave without eating the goat ‘s milk or yogurt with the special taste because of the pasture which is rich in blueberries. It is sour but wonderful. During the summer, many shepherds climb up the mountains, such as snake mountain, to feed the livestock and come down in autumn. What you have to take with you from Valbona is one pound or more of the dry blueberries that are used to make tea and are known for their curative effects. One kg does not cost more than $18 but be careful where you buy it. It is better to seek help from a trusted local that recognizes it, because it is easy to buy the wrong plant which will not have the same effect.

The 6th Festival of Icebreakers Took Place In St. Petersburg﻿