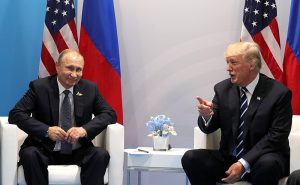 Yes, the American security services attempted to use the “Russia collusion” narrative to unseat a duly elected American president; in other words, a coup. Yes, the Obama administration was completely hypocritical and corrupt, and interfered in Russia’s elections, especially in 2012, when Hillary Clinton helped put 100,000 Muscovites in the streets, demonstrating against a new Putin presidency. Yes, NATO has encroached on Russia’s borders. Yes, there are areas and issues where the United States and Russia could work together for the good of the world, like confronting the scourge of Islamic terror, and its political ideology. Yes, it would be helpful if Russia and America spoke more, worked together more.

However, threatening a war is not the way to make a summit happen.

It is very easy to see the Kremlin-directed narratives in the Russian state-controlled media. The “do this or we’ll have a war” narrative is one of them. I have noticed it more and more lately. The agenda can be seen in Vladimir Putin’s recent description and videos of his new “invincible” nuclear weapons, the launching and testing of the Sarmat II (Satan II) ICBM — and the description of its ability to destroy a state the size of Texas, the Bulava SLBM salvo recently fired from the new Borei class submarines, et cetera, et cetera. The list goes on and on.

The world should realize by now that President Trump does not cower to threats and bullying tactics; leading from behind is dead. However, the world should also realize that Mr. Trump very much wants real peace, a peace built on mutual respect, for as Ronald Reagan said, that is the only peace that will last. America lost that under Barack Obama and is paying the price.

Blaming the lack of good relations between the two countries solely on the domestic political situation in America is also not going to work. Russia has a part in the relationship as well. The Kremlin has simply jumped the shark. There are too many denials — “It wasn’t us!’ for it to be believable anymore. If Russia really wants peace, and a way to move forward with the Trump administration, then help denuclearize the Korean Peninsula, help find a solution in Ukraine’s Donbass, stop enabling the Iranian encroachment in the Levant, help find a solution to Syria.

There will not be a summit just to have a summit and let Mr. Putin look good to the Russian people. There will be a summit if the Trump administration sees a good chance to solve some of the thorny security issues facing the world. That will require Russia to make concessions. Recent behavior by the Kremlin does not show they are willing to make such changes to behavior.

Vladimir Putin recently said Russia does not want another arms race. I am sure that is the case, because it is clear that in such a race the Russian economy would lose.

America is going to rebuild its nuclear deterrent, mainly to oppose the rise of China, instead of the Russian Federation. Congress has just authorized the American militarization of space to counter Russian and Chinese threats.

The United States is about to spend a whole lot of money on rearmament. We tried eight years of appeasement and bowing to dictators around the world. It didn’t work. The world is now a much more dangerous place.

Preventing the arms race from eventually turning into a hot war is definitely something Mr. Trump and Mr. Putin should sit down and talk about when the time is right. However, America will only do so from a position of strength.

Russia Has Always Been Involved In American Elections, 2020 Will Be No Different