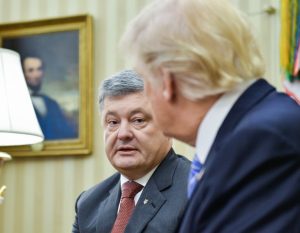 In a recent meeting between U.S. President Donald J Trump and Ukrainian President Petro Poroshenko, on the sidelines of the U.N. General Assembly in New York, Trump asked Poroshenko to “take good care of U.S. companies.” He said it twice. “…They [American companies] see a tremendous potential there, so take good care of them,” said the president.

Trump’s comments shine light on the deteriorating treatment of foreign investors in Ukraine, where old corrupt business practices seem to be impossible to pull out by the roots. Ukraine is a country with forty-two million people, which sits next to Russia – and at the bottom of the Transparency International corruption perception index.   As Kyiv still is dependent on Western largess for support in its effort to grow its economy and deal with the simmering rebellion in Donbass, the treatment of American companies in particular is troubling, to say the least. These corrupt practices include outright asset seizure – Russian style – through fraudulent criminal charges, and even disinformation campaigns in major media.   These black PR operations are not limited to Kyiv alone – they are spilling over to Washington, D.C.

A bizarre, shining example of this behavior was a recent ‘event’ held in a basement on Capitol Hill, where lobbyist for certain Ukrainian interests and selected ‘journalists’ staged a fake Congressional committee hearing called the “US Congressional Committee on Financial Issues,” streamed live on Ukrainian TV.   No current members of Congress were there, and had no Congressional sanction whatsoever. The deputy head of the Presidential Administration of Ukraine Dmytro Shimkiv declared, “The event on the Capitol Hill was not a Congressional hearing. The discussion was held without a public scrutiny and was sponsored by a secret source,” apparently aimed at the Ukrainian Central Bank management. The fact that certain oligarchs decided to export this type of public relations weapon to Washington is shocking to say the least.

In late September 2017 , the Ukrainian TV Channel Inter, owned by the former President Victor Yanukovich’s chief of staff – Sergey Levochkin, and oligarch Dmytro (Dmitri) Firtash, who is wanted by the FBI and awaiting extradition to the U.S. from Austria, launched a coordinated fake news and intimidation attack against American citizens. The Segal brothers, Vadim and Ilya, Americans who emigrated from Soviet Union in 1989 and have strong business interests in Ukraine, are the latest victims. This is just another episode in a long string of Firtash-orchestrated, unlawful actions against the two New York-based businessmen, Segal brothers say.

A decade ago, they had invested over $50 million in an advanced soya processing facility in-country, only to be intimidated, threatened, and see number of criminal cases opened against them by Dmytro Firtash and his allies. The facility was successfully taken over by an armed private security company in 2010 with the support of the allegedly corrupt officials in the Yanukovych government, including Mr. Levochkin and Fursin.   Eventually Vadim Segal managed to regain ownership title, although this did not sit well with their corrupt adversaries, who continued to fight against the facility’s rightful owners through re-opening of a compromised criminal case.   The Hill reported, “For their efforts, they were accused of crimes by Firtash and his cronies who controlled the police force and court systems: Ivan Fursin, a Member of Parliament , the chairman Chairman of supervisory board of Nadra Bank, and the Parliament (Rada) Member Oleksandr Granovsky, Poroshenko reported fixer for legal affairs, who was also connected to Firtash.”
History will probably judge Firtash, Fursin, Granovsky, and former President Yanukovych chief of staff Levochkin, harshly. They had a chance to make their country prosperous, and they utterly failed. However, the only way to ensure justice in this matter is to have an impartial court hear the case and decide on its merits, a U.S. court that is.

If the court finds Firtash and his gang at fault, U.S. authorities should consider sanctions under the Global Magntisky Act. The newly expanded Global Magnitsky Human Rights Accountability Act, named after a Russian lawyer who died in detention in Moscow, authorizes President Trump to block or revoke the visas of “foreign persons “, or to impose property sanctions on them. People can be sanctioned ( a ) if they are responsible for or acted as an agent for someone responsible for “extrajudicial killings, torture, or other gross violations of internationally recognized human rights“ or ( b ) if they are government officials or senior associates of officials complicit in “ acts of significant corruption”.

Human Rights Watch put Firtash on the list of such corrupt culprits.   Of course there is always one other option if the evidence supports it: the U.S. may consider extradition proceedings that will put these alleged wrongdoers in front of an American judge and jury. If so, it will be a huge favor for the people of Ukraine.