A European arrest warrant was issued on Wednesday for the Russian nationals, identified as Alexander Petrov and Ruslan Boshirov, the prosecutors said, charging the two of conspiracy to murder, attempted murder and use of the nerve agent Novichok, reported Al Jazeera. 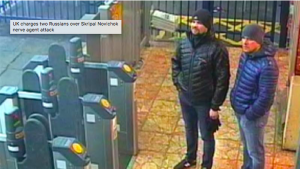 “Based on the body of intelligence, the government has concluded that the two individuals named by the police and the CPS [Crown Prosecution Service] are officers from the Russian military intelligence service also known as the GRU,” British Prime Minister Theresa May told parliament.

“This was also not a rogue operation. It was almost certainly approved outside the GRU, at a senior level of the Russian state,” she said.

Russia must rein in the activities of its military intelligence officers and account for their actions, May said.

“We want Russia to act as a responsible member of the international community. That means it must account for the reckless and outrageous actions of the GRU, which is part of the Russian state,” May told parliament.

“They must rein in the activities of the GRU.”

For its part, the Kremlin immediately denied the evidence and any role in the sickening of the Skripals and a related murder of an innocent bystander on British soil. Russian Foreign Ministry spokesman Maria Zakharova said the following during a press briefing today in Moscow, reported The Moscow Times, along with other Russian official reactions.

“The names published in the media, like the photos, tell us nothing.”

“We urge the British side once again to move from public accusations and information manipulation to practical cooperation through law enforcement agencies.”

— Russia’s representative to the Organization for the Prohibition of Chemical Weapons (OPCW), Alexander Shulgin:

“Russia has nothing to do with what happened, this has been our position that remains valid. We’re seeing this as a provocation.”

“We continue to insist on cooperation with British law enforcement in this case and expect to receive the body of evidence that our foreign colleagues say they have. That includes the possible involvement in the attempt on the Skripals’ lives by so-called Russian citizens.”

“Britain took a very cunning path by not providing any evidence to Russia and not being willing to cooperate with Russian law enforcement agencies. They decided to directly appeal to international structures.”

“Britain is only concerned with one thing now: How to get out of this situation while saving face.”

“I like very much that there’s variety, that one [suspect] is a Slav and the other is probably Tatar. At least there are different nationalities.”

In an emergency statement to parliament, Theresa May says Russian military intelligence was behind the attack on former spy Sergei Skripal and his daughter Yulia. Read more: https://t.co/ri9suAZyha via @ReutersTV pic.twitter.com/7G2eGheh94

More Massive Demonstrations In Minsk…Lukashenko Arrives With A Rifle