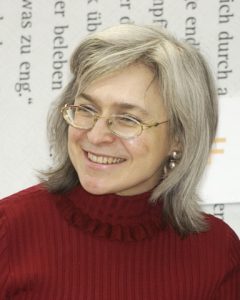 A garden dedicated to the memory of Russian journalist Anna Politkovskaya, who was assassinated in 2006, was opened in Moscow on July 13, reported RFERL. She was one of the most famous journalists murdered in Russia in the last two decades.

It was her reporting from Chechnya that made Politkovskaya’s national and international reputation.[4] For seven years she refused to give up reporting on the war despite numerous acts of intimidation and violence. Anna was arrested by Russian military forces in Chechnya and subjected to a mock execution. She was poisoned while flying from Moscow via Rostov-on-Don to help resolve the 2004 Beslan school hostage crisis, and had to turn back, requiring careful medical treatment in Moscow to restore her health.

On 7 October 2006, she was murdered in the elevator of her block of flats, an assassination that attracted international attention.[7][8][9] In June 2014, five men were sentenced to prison for the murder, but it is still unclear who ordered or paid for the contract killing.