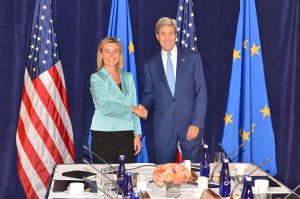 In the lead up to the Free Iran Gathering of 2018 on June 30 in Paris, several Iranian dissident groups put together panels to discuss the situation in the Islamic theocracy and the eventual collapse of the regime in Tehran.

One of the common themes of the discussions was the perception of Iranian corruption of the European Union and its officials. A related truism was also discussed — the absolute appeasement of the mullahs that constantly streams from European capitals. It seems the two lines of thought are connected.

With all of the attention on both sides of the Atlantic has been on Russia as the world’s No. 1 bogeyman, as far as interfering in elections and policy are concerned, perhaps it would be useful to explore the propaganda and disinformation activities of the Iranian state — Tehran has its tentacles extending into Brussels and its self-righteous politicians.

Former U.S. Senator Robert Torricelli spoke on the Free Iran panel of the obvious conclusion that what President Trump is doing regarding shutting down the Iranian regime is what has to be done — what everyone in a quiet moment was thinking should be done, but didn’t have the guts to do so.
The New Jersey Democrat declared that once again the United States, under President Trump, is leading the world, after 8 years of ‘leading from behind’.

In other words, the European policy of appeasement at all costs needs to have consequences for those promoting it.

Perhaps the most striking panelist comments were from the former U.S. ambassador to Bahrain Adam Ereli, who alleged the current European Union ambassador to Iraq, Ramon Blecua, is a bought-and-paid-for Iranian intelligence agent.

Ereli alleged Blecua has built a $12-million villa in Europe, along with $2 million in renovations, despite having no apparent financial means to do so. Ereli went further, saying European official Federica Mogherini selected Blecua even though there were five more highly-qualified candidates and the fact that Blecua was not endorsed by his native Spanish government.

Torricelli mentioned later in the panel discussion that the information on corruption of the European Union governmental structure by Iranian intelligence services was strikingly frightening but explanatory of the appeasement of Iran by the EU.