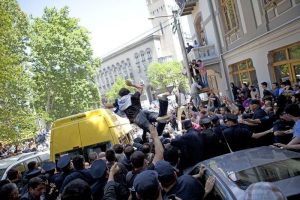 A subway workers’ strike has slowed transport in the Georgian capital, where protesters demanding the government’s resignation were gearing up for a fifth day of demonstrations.

All subway stations in Tbilisi were closed on June 4, and city authorities urged residents to use buses instead.

Tbilisi Mayor Kakha Kaladze apologized to citizens for the transportation problems and said there are no plans to meet the striking workers’ demand for higher wages.