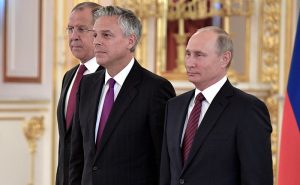 Newly-minted U.S. Ambassador to Russia, John Huntsman, is pushing for a summit between Donald Trump and Vladimir Putin, and has been for some time. Fox News reports the effort “has been an ongoing project” of the ambassador since taking the post in Moscow last year.

“This has been an ongoing project of Ambassador Huntsman, stretching back months, of getting a formal meeting between Putin and Trump,” said a source, reported FNS.

Moscow declared last year that Trump had invited Putin to The White House but the effort seems to have stalled amid additional sanctions placed on Russia due to the Skripal poisonings, continued violence in Donbass, and Moscow’s support for Iran.

Ambassador Huntsman, from his perch in the Russian capital, most likely sees first-hand the rise of anti-American sentiment, and continued Russian weapons modernization, highlighting the importance of better communications between the two capitals.

Of course we need to talk to them.

Kosovo-Serbian Dialogue Is Nowhere In Sight