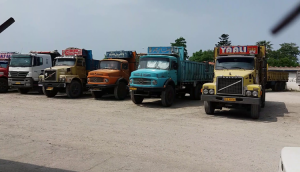 What was at first planned as a three-day protest action has now dragged into its second week of a nationwide strike of the truckers across Iran.

Last week, truck drivers launched a nationwide strike to protest against excessive road haulage taxes, the high cost of spare parts, and low wages compared to the hard work they do and the high cost of living in Iran. The drivers demanded a 50% increase in wages and refused to transport cargo or accept new loads. Major highways have been blocked by parked tractor trailers and fuel trucks. Fuel shortages and long lines at petrol stations have been reported in all major cities as fuel tankers have stopped deliveries. The Road Maintenance & Transportation Organization tried to mollify drivers by announcing a 20% wage increase, however, the truck drivers did not yield to the low increase and called for the following demands to be met:

– A minimum 50% rise in paychecks for domestic and foreign transfers – Increase in monthly fuel ration so the drivers are not forced to purchase fuel at station rates – Respecting the drivers’ private lives – Adopting a new law to decrease commission fees from 14 percent to seven percent – Authorities to monitor commission fees received from the drivers, especially at terminals in major cities such as Tehran, Yazd, Bandar Abbas, Kerman and etc. – Drivers’ wages should be paid based on tons/kilometer so the rights of drivers and load owner are equally respected. – Decreasing social security insurance rates and including driving as a harsh task to receive special coverage – Decreasing road toll fees – Decreasing annual truck taxes.

This strike has quickly spread to more than 270 cities in all 32 provinces of Iran. Since the start of the week, even taxi drivers and bus drivers have announced their solidarity with the truck drivers across Iran and joined the national strike and parked their vehicles alongside the streets.
US union supports Iranian truckers’ strike on the 2nd week

The International Brotherhood of TEAMSTERS in the US, wrote a letter to the Iranian authorities acknowledging the result of the truckers’ strike to be “having no voice in the decisions that impact their livelihoods”.

TEAMSTERS represents 1.4 million supply chain and transportation workers in the US and Canada.

Despite the fact that the Iranian regime is trying to censor the real fact of this this strike for ten days, online activists and strikers are constantly putting photos and videos of the ongoing protest on the internet, especially on Telegram.

Official news agencies of the Iranian regime announced that the protest has ended with the consent of the truckers.

Undersecretary of the Ministry of Roads & Urban Development stated that according to the agreements by the truck drivers on strike, from today drivers across the country will start to work again.

On Tuesday in Tehran, as drivers left the cargo terminal they chanted together “Do not be afraid, we all stand together”. Their actions show that they will not come short until they meet their demands.

Confessions of Officials of the Regime: A group of parliamentarians in Iran has acknowledged the deteriorating livelihood of truck drivers. More than 500,000 drivers across the country are dissatisfied and sometimes gather in cities.

The regime’s Suppression and Security Forces: The Repressive Forces have intensified their repressive actions to undermine the strike. Hundreds of truckers were moving in a long column to Shiraz with the plan to join the strikers were attacked by forces and dozens were arrested. In the city of Kangavar, intelligence agents and law enforcement officers used various measures to break the drivers’ strike.