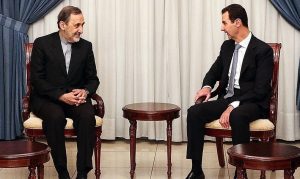 Russia agrees to keep Iran out of southern Syria? We’ve heard this story before. It emerged again on May 28th as it appeared that a crises was brewing between Washington, Moscow and Damascus regarding the regime’s decision to launch an upcoming offensive to retake southwest Syria from the rebels.

But we need to look back to 2017 to remember how this story began. Israel has been demanding Iran leave Syria for years, increasing its rhetoric in 2017 and 2018. In October 2017 rumors emerged that Russian Defense Minister Sergei Shoigu had told Israel that “Moscow has agreed to expand a buffer zone along the Israeli-Syrian border, where Iranian and Hezbollah forces will not be allowed to enter. This was leaked to Arab media and one can only ponder who might benefit by leaking this story. It was leaked in order to see if it was true and how Moscow and Iran would respond. But Russia denied stories that it had said Iran or Iranian-backed forces would leave Syria.

I interviewed Russian deputy-FM Oleg Syromolotov in February 2017. His indication at the time was that Iran and Hezbollah to aid it in the Syrian civil war, and when the war is over they, along with all armed groups, “will leave” Syria when the conflict is over. This has always been the Russian rhetoric on Syria. Foreign forces should leave and will leave. But which foreign forces. Russia never specifies. It could mean US forces in Syria. They are foreign. Technically Israel is seen as occupying the Golan, so Israeli forces are “foreign.” Turkish forces are “foreign.” Iran is not the only “foreign” force in Syria.

Now we need to look at some other details that emerged on May 28. Rumors once again pointed to Israeli demands of a 60 km buffer, keeping Iranian forces away from the Golan. This 60km story actually originates last year as well, in September 2017 and earlier. I wrote about how Israel also zigzagged on its claims about how close Iran’s forces were to the border in November 2017. So Russia’s statements about “only Syrian forces” on Israel’s Golan border are meant to assuage Jerusalem demands about Iran. But they are not totally new. So security sources that once again on May 28 brought up the story of “Russia mulling” keeping Iranian forces 60km from the border were part of another attempt to see what Russia would say, and what Iran would do.

What did Russian FM Lavrov say on May 28? “Of course, all non-Syrian forces should be withdrawn on a reciprocal basis,” he was quoted as saying by the RIA news agency. “This should be a two-way process. The situation, when only representatives of the Syrian armed forces will be deployed on the Syrian side of the border with Israel, should become the outcome of such work.”

Let’s go back and remember the context of the May 28 statements. Russian President Vladimir Putin said on May 17 after meeting Syrian regime president Bashar al-Assad: “We presume that, in connection with the significant victories and success of the Syrian Army in the fight against terrorism, with the onset of a more active part, with the onset of the political process in its more active phase, foreign armed forces will be withdrawn from the territory of the Syrian Arab Republic.”

Iran was nonplussed. “No one can force Iran to do anything. Iran is an independent country and determines its policies in the region and the world based on its national interests,” Bahram Ghasemi, spokesman for Iran’s Foreign Ministry, said on May 21. Syrian officials also disputed any concept of Iranian withdrawal. So the stories that emerged after the May 17 illustrate another circular set of rumors, leaks, allegations, media portrayals, denials and nothing changing.

This is the usual cycle. Russia says something. Sources in another state indicate Russia meant something else. Media report that Iran will do something because of Russia. Iran and Damascus deny the story. Russia denies having indicated this. Start again.

The ceasefire and Israel’s interests

Israel has been seeking to push daylight between Iran and Russia in Syria. I’ve written about Israel using various forms of Clausewitz diplomacy to reduce Iran’s influence in Syria. How Israel message is not just to Iran but to Assad and Russia. This “diplomacy” through air-strikes has been ongoing since 2017.

The ceasefire signed in July by the US, Jordan and Russia clearly had many benefits for Israel and the Syrian regime as well. It created quiet and clarity. The US also decided to wrap up its program of support for the Syrian rebels in the south. But we also know Israel was concerned after the ceasefire. We know it made its wishes clear to Washington and to Moscow. When I wrote my May 18 article about the Israel airstrikes against Iranian forces on May 10, one of the men I interviewed noted: “What is interesting and impressive is that [Prime Minister Benjamin] Netanyahu was in Moscow on Wednesday before the May 10 events,” says Laskart. “He got a green light, basically. He has been there around eight times, more than he was in Washington. So I would say it’s not clear exactly the deal between [Russian President Vladimir] Putin and Netanyahu, but it is impressive. The Russians may be unhappy with the Iranian presence as well,” he theorizes.

All of these stories about who got the green light or what Netanyahu and Putin discussed will never be known. Russia and Jerusalem keep quiet about such things. But we can always read the public information and the information that ends up in media that is supposed to send a message. For instance in mid-April 2018, Israel warned the Russians that supplying Syria with S-300 anti-aircraft missiles would be a major threat. Iran warned that it would retaliate against Israel. Israeli jets were pulled from a drill in Alaska to come home. Liberman issued several warnings, including that an attack on Tel Aviv would result in an attack on Iran, that Israel would prevent the S-300 from being operational in Syria and would prevent Iran from building forward bases in the country.

The “ceasefire” in southern Syria therefore has been a ceasefire to benefit the regime and the rebels in a sense by keeping the quiet and allowing Israel and Iran to carry on a duel. Now that duel is winding down and the regime wants to move into southwest Syria. In February the Beit Jann pocket near the Golan fell to the regime. On April 3 the last rebels left Ghouta in Damascus and on April 20 the rebels in Qalamoun agreed to leave and Yarmouk was taken by the Syrian regime in mid-May. So the regime has been consolidating its control.

But the regime knows moving south with Iranian-backed forces could lead to Israeli action. So it consults with Moscow and Moscow speaks to Israel and Israel speaks to Washington and Washington speaks to Jordan. It’s not entirely clear in what sequence, but these are the kinds of complexities involved. Who does Iran speak to. Iran, Russia and Turkey have been working closely on “de-escalation” for several years. They meet in Astana and have met in Sochi and Ankara. So Iran speaks regularly with Moscow and Damascus. But Iran also wants to retain its freedom of action. Iran has built up an impressive network of militias in Syria over the years, an issue I have written on. But we also know that Iran lost material and men in recent airstrikes and is nervous.

Understanding the complexities involved and the different agendas and players in southwestern Syria is key to understanding reports about the area and what may happen. Washington cares about Israel’s interests and its own limited interests in Tanaf and its ally Jordan. Jordan cares about stability and refugees and not wanting to be seen as abandoning the rebels. The Syrian regime wants back its territory. Russia wants the Syrian regime secure. Iran wants influence. The Syrian rebels would like to stay relevant.

Russia employs language carefully regarding Syria. It doesn’t want to be seen as harming Iran or giving in to Israel. It wants to be seen as a key and reliable ally to the regime. Russia also understand’s Israel’s concerns and doesn’t want to see Iran’s influence expand in Syria. But it is Israel that also wants to test the waters about where the red lines are on airstrikes and also to see how Russia and Iran react to various reports claiming Iran has been asked to leave Syria, or leave Syrian military bases or stay away from the Golan.

The Last Train, A Short Story

Prelude To Genocide: Remembering The Days Before August 2014 And The Yazidi Genocide

What Would Abe’s Peace Treaty With Russia Include?