Set among the hills of Herkimer County in Upstate New York, not far from Cooperstown with its Baseball Museum and within easy reach of the state capital of Albany, Holy Trinity Orthodox Monastery and Seminary is located in a hamlet aptly called Jordanville. There are no coincidences perhaps that this outpost of the Russian Church Outside of Russia (ROCOR) preaches the Gospel in a locale named after the river of such renown in the Holy Land. Indeed, this holy land of Russian monastery life and tradition emerges from the Central New York landscape as had the casual observer somehow traversed an invisible line into an alternative dimension. Golden domes, icons, beeswax candles, incense, quiet Byzantine crosses gracing a growing Orthodox cemetery await the traveler. Unexpectedly one even spots a llama or two cared for by the sisters of the nearby Sisterhood of St. Elizabeth, named after the martyred sister of the last Empress of Russia. 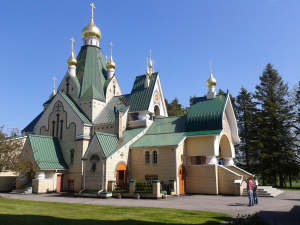 The present church, dedicated to the Holy Trinity, was built after the initial structure burned down the very day it was consecrated on July 17, 1935. Deeming that a much grander edifice to the glory of God was needed, the cornerstone of the current place of worship was set in 1947 with construction completed 1949. Above its main entrance is an imposing fresco of Abraham’s encounter with three angelic beings described in Genesis 18:2-3: “2 And he lift up his eyes and looked, and, lo, three men stood by him: and when he saw them, he ran to meet them from the tent door, and bowed himself toward the ground, 3 And said, My Lord, if now I have found favour in thy sight, pass not away, I pray thee, from thy servant…” 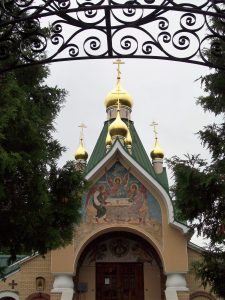 Those familiar with Orthodox Christian worship will note that the Altar with the consecrated Body and Blood of Christ, the Holy of Holies, is not immediately visible to the worshipers who are instead fed with the artistic beauty of the icon wall, the “iconostasis,” through which priests and deacons enter here by means of a center gate. This gate is closed most of the year, but is wide open for Pascha (Easter, that is the Feast of the Resurrection of Jesus Christ) and the ensuing “Bright Week.” 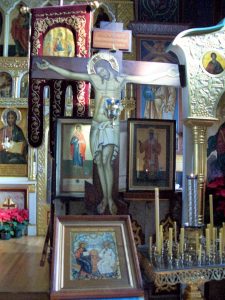 Behind the cathedral one finds a building of classrooms, reception hall, icon studio and the rather new The Foundation of Russian History Museum in which are found precious treasures of Russian and Orthodox history. Some of these objects were recently included in exhibition in Frankfurt, Germany titled “Hessian Princesses in Russian History.” Other objets d’art have found their way to a Faberge’ exhibition (Unknown Fabergé: New Finds and Re-Discoveries at the Museum of Russian Art in Minneapolis, MN) while the museum was featured in the New York Times in an article by Eve Kahn (April 3, 2014) at URL: https://www.nytimes.com/2014/04/04/arts/design/treasures-and-trivia-of-the-romanov-era.html

That article gives the visitor a reason to walk up the hill to the nearby cemetery in which Orthodox faithful are buried in traditional fashion to await the Judgement of the Dead and the Resurrection. Cremation is strictly forbidden in Orthodoxy, while bodies are placed in the ground without the customary concrete vaults used elsewhere. Even embalming is not encouraged, although bodies which must be transported there from long distances may be an exception. The New York Times article mentions Eugenia/Evgenia Smetisko, sometimes called Smith. The former directress of the St. Nicholas House Foundation in Newport, Rhode Island, had claimed to be the surviving daughter of the Tsar and Tsarina, namely Grand Duchess Anastasia Nicholaevna Romanov of Russia. Generally thought over the decades to have been a false claimant, her case has suddenly garnered new scrutiny and consideration.

In his book (IceBox Publishing, 2018) Anastasia Again: The Hidden Secret of the Romanovs, pre-released until December 2018 exclusively via the publisher at URL https://tsarizm.com/hardback-version-anastasia-truth-princess-anastasia/, Froebel-Parker makes note that there is a discrepancy between the “official” date of birth on the immigration papers of the woman known as “Evgenia Smetisko,” given as 1899, and that on the tomb cross which states June 18, 1901. The latter date is precisely the day on which Anastasia, the youngest daughter of Tsar Nicholas II and Tsaritsa Alexandra Feodorovna, nee von Hessen-Darmstadt, arrived in this world during the last decade of Imperial Russia. 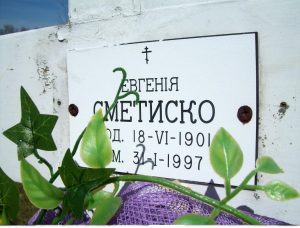 Will the museum benefactrix doubted by so many for so long be one day rehabilitated to her claimed identity? Tsarizm.com will be breaking new insights throughout the year, so that readers are encouraged to check back frequently as this constitutional temporarily ends where a new journey may soon commence with the resurrection of a century old mystery. 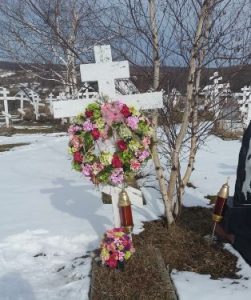 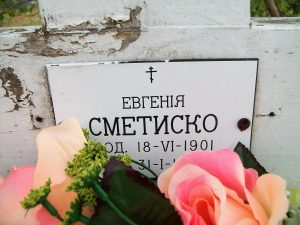