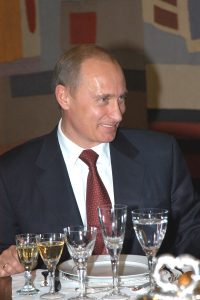 The rhetoric between the United Kingdom and the Russian Federation escalated today after Theresa May’s ultimatum to Russia regarding the source of Kremlin-designed nerve gas which poisoned a former Russian spy, his daughter, and hospitalized a total of 21 people in Salisbury. A second Russian with ties to a deceased oligarch was also found dead.

“Bearing in mind what the president [of Russia Vladimir Putin] said [in his State-of-the-Nation Address], no one can appear in his or her country’s parliament to say ‘I give Russia 24 hours,’” Zakharova told the 60 Minutes program of the Rossiya-1 television channel, reported Russian state news agency TASS. “No one knows anything, including Theresa May, who has no actual fact in her hands,” Zakharova said.

Interfax reported, MOSCOW CALLS ON BRITAIN TO REFRAIN FROM INTIMIDATING RUSSIA AND SPEAKING IN ULTIMATUM LANGUAGE: ONE DOES NOT GIVE 24 HRS TO A NUCLEAR POWER – RUSSIAN FOREIGN MINISTRY.

A range of measure are being considered by the British government including cyber attacks on the Russian propaganda machine and closing down Russian media inside the U.K. London is also considering additional sanctions on Russian nationals and companies. Further military deployments to Eastern Europe are also on the table.

The Russian Foreign Ministry also stated British media would not work in the Russian Federation if Britain closed RT inside the country.

The Russian embassy inside Britain issued a series of tweets, “Britain must comply with the Chemical Weapons Convention which stipulates joint investigation into the incident, for which Moscow is ready.

“Without that, there can be no sense in any statements from London. The incident appears to be yet another crooked attempt by the UK authorities to discredit Russia.

“Any threat to take ‘punitive’ measures against Russia will meet with a response. The British side should be aware of that.

“Today the Embassy sent a note to the Foreign Office reiterating that Russia is not involved in the Salisbury incident and outlining the above mentioned demands for joint investigation,” reported Express.uk.

????On March 13, UK Ambassador to Russia Laurence Bristow was summoned to the Russian Foreign Ministry. Representations were made to him because of the evidence-free accusations of Russia’s alleged involvement in the poisoning of Sergei Skripalhttps://t.co/H6xbctA5LZ pic.twitter.com/YCGyJMneJ6