For two days in a row, 17-18 February, in an atmosphere of great enthusiasm and expectations for the future, Kosovo citizens celebrated their 10th anniversary of independence. It is a big celebration for all Albanians, wherever they live, as 17 February 2008 marked the end of slavery and exploitation from Serbs; a war that caused death and destruction to thousands of Kosovo families. That notable date is embedded in the minds of everyone, the moment when 109 MPs out of 120 in the Assembly of Kosovo voted for the independence from Serbia. Kosovo’s first PM, Thaci, in 2008, signed the independence document on that glorious date that will remain unforgettable in Kosovo’s history.

Now, under a clear and free sky, Kosovo people are reconstructing their future to progress alongside other Western Balkan countries, despite the fact that not all UN countries have acknowledged its independence.

The anniversary celebrations started on Saturday, to end up Sunday. A lot of festivities were organized, including the British singer, Rita Ora, originally from Kosovo, who performed at the event.

The Kosovo Parliament held a solemn session with the participation of Kosovo MPs, invitees from the Albanian Parliament, Albanian Prime Minister Rama and President Meta, politicians from all Albanian regions, international bodies and organizations, etc. Kosovo Prime Minister Haradinaj and President Thaci recalled the huge efforts and sacrifices of the Kosovo people and UÇK leaders to liberate the country, also the significant role of internationals and NATO. The past is unforgettable, but the eyes will be set on Kosovo’s future and its dream to make its citizens Europeans.

The police and security forces marched in the centre of Pristina, surrounded by thousands of people who cheered and waved Kosovo and Albanian flags.

The “New Born” monument in the city centre, the symbol of the new state of Kosovo has been changed into “NEW10RN” on the occasion.

On this specific day, former US President George W Bush, through a letter, greeted Kosovo people, by mentioning the moment of its recognition by USA.

“I was proud to acknowledge Kosovo as independent and sovereign country. This historical date is a reflection of the country’s engagement to continue the accomplishments of higher standards of human dignity, to push forward the freedom issue”, he wrote.

Former OSBE Ambassador in Kosovo during the war, William Walker, was also present at the event. His words – “I will not want to die until I see Kosovo better” – have touched everyone. He is highly motivated by Kosovo people and their love for him and the USA. He comes to Kosovo often and considers it a second home. He always goes to Reçak to pay respect to the people massacred in this village during the war. 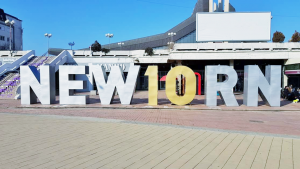 Albanian Prime Minister Rama, present in the event, also greeted the Kosovo anniversary. But his controversial statement that in the future Kosovo and Albania will have the same foreign policy regarding embassies and, why not, a common President, has created strong debate in the Serbian political environment. Serbian Minister of Defence, Vulin, regarded such a statement as a premise for a Greater Albania and some Serbian politicians have proposed to consider Rama a non-grata person for Serbia. Even the European Commission expressed reservations against such declarations that may be interpreted as interference and do not help good neighbourhood relations.