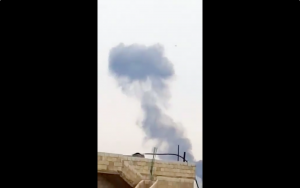 A terrorist group operating near the Idlib de-escalation zone in northwest Syria on Saturday shot down a Russian Su-25 fighter – the first Russian plane downed in Syria since 2015. The pilot safely ejected and survived the crash – but was later killed by jihadists on the ground.

Video published by the Ebaa News Agency depicted the downing of the jet from the terrorists’ perspective, showing what appears to be a MANPADS lock on and strike the jet, and – later – the terrorists swarming the wreckage, according to RT.

Of course, the government of Russian President Vladimir Putin wasn’t going to let this latest affront go unanswered: on Friday, it published footage of a series of precision missile strikes that were said to have killed 30 militants…

Russia Goes And Does It – Tests Anti-satellite Missile