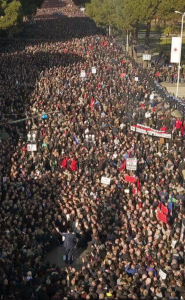 Today, as foreseen, the Albanian opposition alliance organized a big protest on the main boulevard, in front of the Prime Ministry. The protest started at 12 midday and continued for two hours. Beside the two main opposition parties–the Democratic Party (DP) and the Socialist Movement for Integration (SMI), the Republican Party, the Movement for National Development, the Rural Environmental Party, the Demo- Christian Party, the Union of Human Rights, and the Anti-communist Society of Ex-political Dissidents also took part in the protest. According to the opposition, there were almost 500,000 people tn the protest.

The moto of the protest was “Rama, go away!”

In his speech, the Head of Democratic Party, Lulzim Basha, demanded free and fair new elections. He declared the bankruptcy of the Socialist government. “Now the decision is made by the people in the protest”, he said. “The illegal socialist government, which bought the election votes one year ago, has violated the rights and freedom of ordinary Albanian citizens and they do not feel responsible for this. In the name of all Albanians and opposition, we demand Rama’s resignation and the establishment of an anti-mafia government that will fight against crime and forward the justice reform, based on the constitution, preparing the platform for new and fair elections. In Albania, an anti-national, anti-democratic and anti-European project is established. The socialist government is closely linked with the crime oligarchy; its ministers are involved in drug trafficking and money laundering. This time we are all united to combat the evil”, he concluded.

The protest was peaceful with no incidents. The police had taken strong measures to ensure the safety of people and institutions. There were almost 1,500 police in the streets, fire engines and ambulances, ready to intervene in case there were any clashes and defend the main institutions in the centre, as there had been some signals of presumed violence on the part of SMI supporters. Buses from other cities were not allowed to enter the centre of Tirana and there were some limitations for cars on the main boulevard and streets connected to it. The police prepared for violence. At the time of writing this article, there has been no evidence of sporadic clashes.

According to some online media, today’s protest was smaller than the DP protest of 2017, taking into consideration the fact that this one included all opposition parties and their supporters.