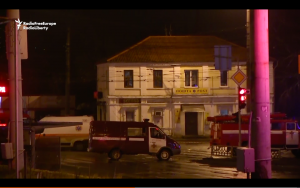 A man armed with explosives barricaded himself in a post office in Kharkiv Ukraine with hostages, 9 adults and two children. The hostages were later rescued by Ukrainian special forces police. None of the hostages were harmed.

“The patrolmen came to the place of the robbery in a few minutes,” Anton Gerashchenko, an adviser to Interior Minister Arsen Avakov wrote on Facebook.

“The robber realised that he could not now safely leave the crime scene with the loot and he decided to declare that he was taking everyone hostage.”

“All hostages freed in Kharkiv. The assailant was arrested,” President Petro Poroshenko wrote on Twitter, while Avakov published a picture of the man, with blood streaming down his face, being held by a policeman, reported The Sydney Morning Herald.

Opinion: Now Russia May Have Leverage With China