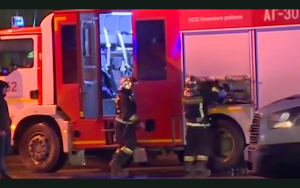 Russian President Vladimir Putin today confirmed the bombing which killed ten and wounded many more was a terror attack. He requested Russian security services ‘eliminate the bandits at first sight’. Putin stated another attack was prevented.

At least 13 people were injured Wednesday evening when an improvised explosive device went off at a storage area for customers’ bags at the supermarket in St. Petersburg. Investigators said the device contained 200 grams (7 ounces) of explosives and was rigged with shrapnel to cause more damage, wrote CBS.

“What would have happened if those thousands (of terrorists) that I have just spoken about, hundreds of them had come back to us, trained and armed?” Putin questioned. He also stated he asked police to “act decisively, do not take prisoners, eliminate the bandits on the spot.”

The attack may be designed to interrupt the coming Russian presidential election in 2018. Russia has a large Muslim population and the Kremlin is worried about ISIS fighters returning to Russia as the war in the Middle East winds down. Many Islamic fighters may want to exact revenge on Russia after the successful campaign in Syria and Iraq.

Putin called U.S. President Trump recently and thanked him for a CIA tip that prevented another attack in Russia.

Opinion: Showdown At The Moscow Corral

Ex-Mayor Of Tbilisi Released From Prison