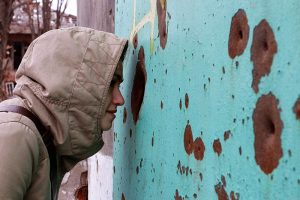 Organization for Security and Cooperation in Europe (OSCE) observers once again warned that fighting in the Donbass region of East Ukraine could be escalating out of control, with violence rapidly increasing as heavy weapons are once again moved to the front.

“Ertugrul Apakan, chief monitor of the special monitoring mission for eastern Ukraine at the Organization for Security and Cooperation in Europe, told reporters on Tuesday that the number of cease-fire violations increased by 35 percent in the past week compared a week earlier. Local media reported intense shelling and damage to properties on both lines of the conflict this week,” reported Associated Press.

Russian President Vladimir Putin has used East Ukraine as a flash point for leverage during periods of negotiations over the status of the breakaway region. With the arrival of the Trump administration, and the approach of the 2018 Russian president election, both sides have been looking for a way out of the conflict that saves face. The increase in violence in Donbass could be Russia, or Kyiv, jockeying for position in any final agreement that may emerge.

Many in Ukraine believe that the government in Kyiv is also using the continued war as a mask to cover up systemic corruption that is rampant throughout the economy and government.