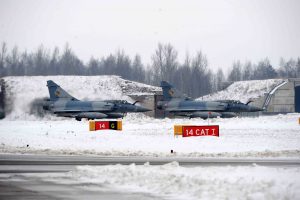 Image by Ministry of National Defence Republic of Lithuania

A study by the Riga-based NATO Strategic Communications Center of Excellence (StratCom) found that 2 out of 3 tweets about the NATO presence in the Baltic states are produced by robotic accounts, or Bots. Within the Russian Federation itself, this number rises to 84%.

“The study analyzed the situation in four countries – Latvia, Lithuania, Estonia and Poland. While Estonia has disproportionately frequently been targeted by bots, Poland and Lithuania have seen the least automated activity. Authors of the StratCom study have got an impression that the Twitter in Russian is policed less effectively than it is in English,” reported The Baltic Times.

“The first Robotrolling study looks at Twitter-mentions of NATO and one or more of the host countries Estonia, Latvia, Lithuania, and Poland. The period considered is 1 March – 30 August 2017. The total number of Tweets considered is 32 0001 of which 1 in 3 are in Russian. The number of active users is 11 600, of which 1 in 4 wrote in Russian. Russian-speaking users are thus, on average, twice as active as their English-speaking equivalents.”

The activity was highest during recent NATO exercises meant to show a credible NATO deterrent on the Russian border of the alliance, especially in light of the militarization of Kaliningrad, a Russian exclave left over from Soviet days.

Estonia received the most attention from robotic accounts with news focusing on British troops, the stationing of US F35 aircraft, together with a number of military exercises; also violations of Estonian airspace by Russian aircraft provoked generated a large amount of engagement on social media over the summer.

The Baltic nations are considered very vulnerable to Russian active measures due to geographic isolation and a large percentage of Russian-speaking citizens.

Can Romania Really Rid Itself Of Corruption?