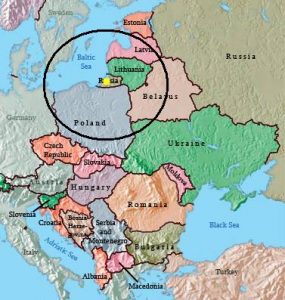 Russia threatened today to deploy more nuclear-capable Iskander missiles in the Russian exclave of Kaliningrad, in the Baltic region, due to alleged ‘aggression’ by NATO forces after the alliance placed armored units back in Europe, in the Baltic countries and Poland, citing Russian aggressive behavior towards the former Soviet-controlled areas.

The RIA news agency cited the head of the lower house of parliament’s defence committee, Vladimir Shamanov, as declaring this intention.

Russia has heavily fortified and weaponized Kaliningrad which has worried NATO commanders as to the alliance’s ability to protect NATO forces in the region. Recent large Russian exercises in Belarus have compounded this fear.

Although NATO has placed armored brigades in Eastern Europe, the force is not strong enough to stop a Russian invasion and is more for deterrence, ensuring any conflict in the region will involve American forces.