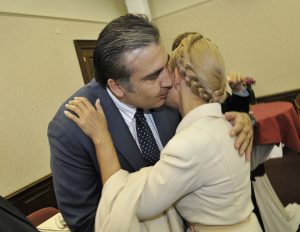 Ukrainian authorities today served court papers to Mikhail Saakashvili who is holed up in a hotel in Lviv after crossing the border in defiance of Ukrainian President Petro Pororsheno. Saakashvili was ordered to appear at a court hearing on Monday.

“We are acting lawfully and protecting the law,” the former mayor of Odessa said at a live press conference yesterday.

Below is a video of Saakashvili discussing the border incident.

“In an interview with The Associated Press at his hotel Monday night, Saakashvili called the current situation in Ukraine “tragic” and said he would devote himself to helping to create a “new political class for an emerging Ukraine,”” wrote AP.

The narrative Saakashvili is putting out is that Poroshenko and his government is corrupt, oligarchs are shooting for just an image of Reform, and his new party is the vehicle to bring real change to Ukraine.

Poroshenko stripped Saakashvili of his citizenship in July, making him stateless. Many say this was done to prevent him from becoming a political force inside of Ukraine.