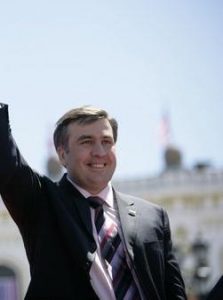 After having his citizenship revoked by Ukrainian President Petro Poroshenko for seemingly political reasons, former Georgian president and former mayor of Odessa, Mikhail Saakashvili intends on crossing the border into Ukraine from Poland on September 10th of this year.

“All I am asking for is to be able to back to go court and defend my rights,” declared Saaksashvili, reported the Asssociate Press.

Saaksahvili has been open about his desire to challenge the government of President Petro Poroshenko, describing Poroshenko’s alleged support for corruption in Odessa where Saakashvili worked as mayor for a brief time. Saakashvili even went so far as declaring he would form a new political party to challenge the status quo in Ukraine.

It is likely Poroshenko revoked his citizenship to prevent him from running for any political office in Ukraine in the future.

Saakashvili is wanted for extradition by the Georgian government after being accused of corruption in his former country. The loss of his citizenship would also no longer prevent Ukraine from extradicting him to Georgia.