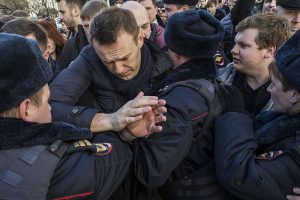 Firebrand anti-corruption activist in Moscow, Alexei Navalny, was arrested by police as he left his home enroute to anti-corruption protests scheduled in cities across Russia today.

Navalny’s wife, Yulia, said on his Twitter feed that he was arrested about a half-hour before the demonstration was to begin. There was no immediate statement from police, reported Associated Press. The event was moved by Navalny to Tverskaya Street after the original venue was shut down by police.

The main thoroughfare was called Gorky Street during Soviet times and is now a trendy avenue full of hi-end shops and cafes. The street was being used for a festival for remembering Soviet traditions and also full of revelers in historic Russian costumes.

Although over 1,000 were arrested during the last protest, police confirmed they would not arrest people today if they did not carry signs or shout slogans.

Today’s protests were held in many Russian cities including the major Pacific ports of Vladivostok and Khabarovsk and in Siberia’s Barnaul, where images showed hundreds of people involved. The Kremlin has been concerned the movement will spread.

Navalny has announced his candidacy for the Russian presidency in 2018. He was attacked with caustic chemicals recently which caused him to lose partial vision in his right eye.

US Investigating Possible Covert Plan To Disrupt US Elections