In a stunning failure of using an illustrative photo for a billboard in Iran, a group of Israeli soldiers appear next to a poem in Shiraz, according to a photo and tweet that appeared online.

The original tweet of the photos was in Turkish:

Holy or Sacred Defense Week this year coincides with the 30 year anniversary of the end of the Iran-Iraq war when hundreds of thousands of Iranians died fighting Iraq. It is particularly important this year and the poster was supposed to commemorate it.

How the person who posted it obtained the image got it from another tweet in Farsi, it does not appear to be a hoax.

The investigation below shows that the original of Israeli soldiers appears to have been photoshopped and changed for the billboard.

The billboard is allegedly in Shiraz, and shows three soldiers in what appear to be Israeli uniforms, looking out into the clouds. The words on the billboard belong to a poem from Ali Moalem Damghani (علی معلم دامغانی). The poem can be found online.

The original poem’s section included on the billboard reads:

“They stared at me, still glorious

I see their shadow literacy on the mountain”

I attempted to search for the image in Google images and could not find the original image. But the rifles and style of uniform is of the IDF. Someone must have taken the phone from somewhere. I looked in Shiraz and couldn’t find an intersection that was similar. There is one at Sobooye blvd and No. Ahmadi street where they meet Hazrati street. But it is only similar, not precise. But a source pointed to Namazi square as a more likely location.

Either way, I searched on Google for “Israeli soldiers three standing back to camera” and came up with a similar photo. Yet unsurprisingly the female soldier was cropped out, which indicates the person who made the image knew he was taking a stock photo of Israeli soldiers. 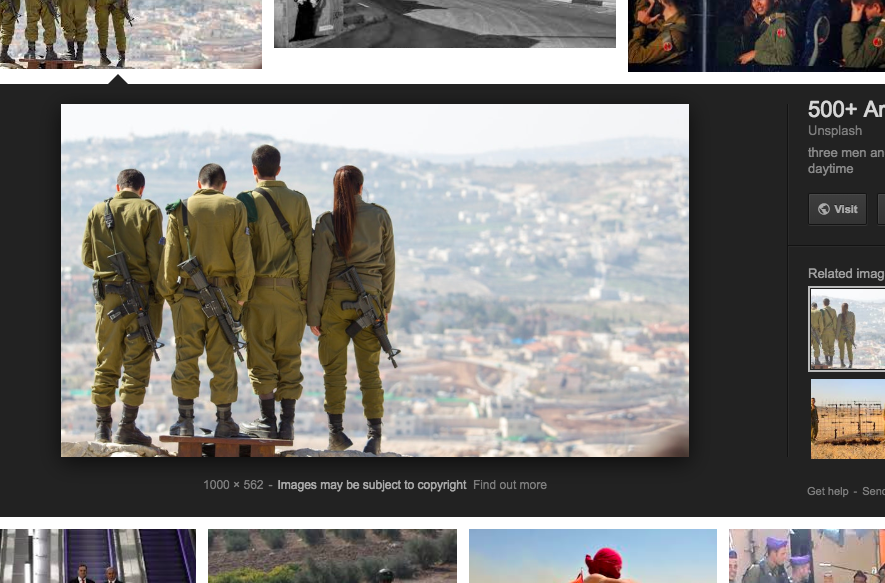 The photo by Timon Studler was apparently cropped and used in Shiraz for a billboard. (See original at Unsplash)

A search of Google images does not show this photo in any other altered forms. The photo has been used to illustrate an article at Medium. It is credited to Timon Studler and has been posted at Unsplash and can be found at this link.

A comparison of the billboard and the Studler photo.

A comparison clearly shows this is the same image.

Why someone cropped it, added a line of an Iranian poet and put it on a billboard is unclear.

On September 26th the billboard was removed according to a tweet by @haj_komeil.

Now the question will be why it was ever put up in the first place. 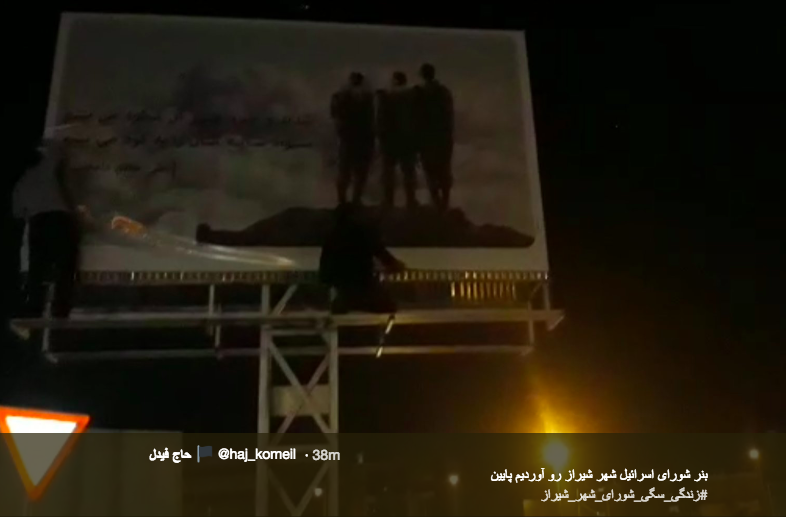 A new image was put in the place of the old one by Wednesday night.