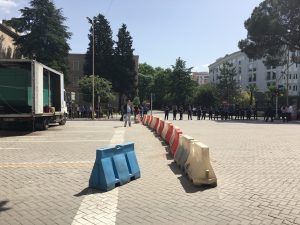 The Albanian Opposition party and its ally’s protest, planned days ago through media and tv spots by the Democratic Party (DP), whose “new” offices now are settled in a tent in the middle of main boulevard for more than 80 days, was waged peacefully and with no incidents.

Previously, there had been warnings of violence; some foreign embassies even had warned their citizens to take care not to go out.

But everything went smoothly, contrary to what was foreseen. Thousands of people took part in the protest, coming even from other districts of Albania.

Since yesterday, some DP leaders stressed that there was no need of violence and today they appeared in the protest together with their families and children. 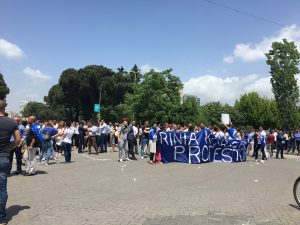 Even though DP seems to be alone in its protests against the current socialist government, contrary to international opinion, who continue to push them to sit in the parliament and take part in June elections, they have not withdrawn their demands for holding free elections to form a caretaker government.

Anyway, it seems that elections will be held without the main opposition in the country, so now DP leaders are trying to play their role through obstruction.

Today’s protest showed them peaceful, compared to the socialist opposition protest of 2013, where 4 people were shot by the army in the boulevard.

But according to opposition, there were more than 500 thousand people, though the number may not be quite exact.

The protest started with some patriotic songs.

In his speech, the democratic leaer, Lulzim Basha, called on participants to behave correctly and go home calmly after the protest, noting that their force is not violence but democratic means.

Returning to DP headquarters later, he held a speech conference, where addressing democrats, he stated: “If the same number of people as today’s participation, would boycott June elections, that would be a victory for Democrats. With your commitment, you gave courage to every Albanian. Today, the whole Albania is breathing freely, hopefully and full of confidence; your protest beat the evil. The DP headquarters is the house of every Albanian, who aspires freedom. From here, we started our movement for free and fair elections; from here, we exercised our firm political parliamentary stand; from here, we achieved the greatest citizenship union. You beat fear and showed to the world the truth about this government of crime and narcotics. We will have free elections only if we elect a caretake government. We led you towards our final goals, but it was you who won the battle, it is your sacrifice and courage to take it up to the end successfully.” 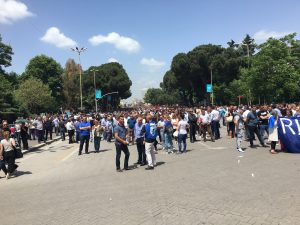 Meanwhile, there are voices within DP that consider the fact of not participating in elections as a step backward, far from the European dream.

During the protest, the socialist Prime Minister Edi Rama was in Vlora city, Western Albania, to introduce socialist candidates for the upcoming elections of June 2017.

Kremlin Wants To Trade Savchenko For Russian Prisoners In US