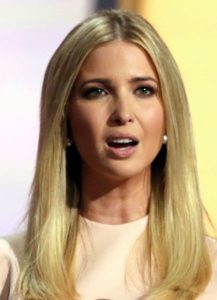 The Syrian missile strikes by the Trump administration seem to have taken the Kremlin by surprise. One of the ways this is noticeable is the coordinated narrative that emerged on Russian state media in response to the missile attacks. There was a couple days of delay; however, then the decision by the Kremlin became clear – let’s blame this on Ivanka.

The Kremlin does not like to be surprised. The strikes made Russian President Vladimir Putin look vulnerable to actions by an unpredictable new American president. To counter this, Russian media is focusing on the fact that Trump listens to his daughter, Ivanka, and she has his trust. The message is that Trump is weak and was manipulated by his liberal daughter.

The American media reportedly widely that Ivanka was the one outraged over the gassing of Syrian babies by nerve gas. This news has been all over the media in Moscow and throughout Russia, obviously coordinated by those in control of the narrative for the Russian people.

However, TASS also added this, “Eric Trump told the Telegraph he was “sure” his sister Ivanka had used her influence over their father to encourage the US president to launch Syria strikes.”