At 2:43am warning sirens sounded in the Jordan Valley. Israelis and Jordanians were woken up by the sound of a loud boom that was heard as far away as Jerusalem. According to reports an anti-aircraft missile fired from Syria was intercepted by Israel’s Arrow missile defense system. “This is the first time the IDF confirmed the operational use of its Arrow ground-to-air missiles,” says Ynet. 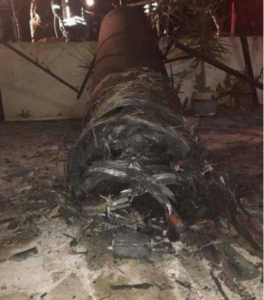 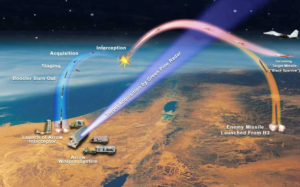 The successful deployment of the Arrow system and Syria’s attempts to down an Israeli jet mark an escalation in the tense area along the Golan border between Israel and Syria.

The escalation in the air came as the Syrian regime is increasingly shoring up its position on the ground. In Palmyra, near where the alleged Israeli strikes took place, Syrian army, supported by Russia and other allies, including Hezbollah, Iran and militias, have been making gains against Islamic State. They’ve taken strategic heights in the area and ISIS is being pushed back. Syria has devoted resources to taking Aleppo last year, allowing ISIS to creep back into Palmyra, but now the regime seems to be moving resources to this area.

The area between Damascus and Lebanon has been a transit point for weapons moving to Hezbollah. This has led to numerous alleged Israeli airstrikes and missile attacks over the years. Israel does not confirm these strikes, but Syria has blamed them on Israel, as has foreign media. Russia Today, for instance, notes “The latest incident is the third time that Israel has bombed targets in Syrian territory. In mid-January, Israeli forces hit the Mezzeh Military Airport west of Damascus, with the facility rocked by several explosions. On December 7, the state agency SANA reported that multiple surface-to-surface missiles had been fired by the IDF from the Golan Heights.”

This is a reminder that Benjamin Netanyahu was recently in Moscow and that Israeli officials have repeatedly suggested that weapons transfers to Hezbollah was a red line. Israel would act to “prevent the smuggling of sophisticated weapons, military equipment and weapons of mass destruction from Syria to Hezbollah.” said Defense Minister Liberman last year. In conversations with Russian diplomats, such as Deputy Minister of Foreign Affairs Oleg Syromolotov, who was in Israel in late February, Israel has expressed concern about Hezbollah’s role in southern Syria and about the issue of Iran establishing permanent bases in Syria. Iran’s IRGC has played a key role in supporting Syria’s President Bashar al-Assad with men and material during the war.

In numerous small clashes between Syrian rebels and the regime along the border, mortars and rockets fell inside the Israeli-controlled part of the Golan. Syrian rebels, including various factions such as the Nusra front, came to control almost all the territory abutting Israel. Israel constructed a new fence along the Golan border after 2012. But fears of Hezbollah and Iranian encroachment remained. In January 2015 Jihad Mughniyeh was killed on the Syrian side of the Golan by what Lebanese media claimed was an Israeli helicopter strike. He was the son of Hezbollah commander Imad Mughniyah who had been assassinated in 2008. One anti-Israel blog cobbled together a long list of alleged Israeli attacks inside Syria.

In September of 2015, after Russia’s air-force intervened in the conflict in Syria, Netanyahu rushed to Moscow to discuss “de-confliction” with the Russians to make sure that Israel’s desire to strike in Syrian airspace if need be to prevent weapons smuggling or threats would not be ensnared in a Russian response. Prior to the arrival of the Russians, Israel was able to act with impunity along the Golan, if it needed to. Syrian refugees and wounded were sometimes permitted entry to Israeli hospitals, and Israel had a quiet understanding and “working relationship” with Syrian rebels along the Golan. A small pocket of territory in the southern Golan between Israel and Jordan was controlled by an ISIS-affiliate, but it did not attack Israel.

By the summer of 2016 the border was still a constant state of tension but also relative calm. Jonathan Spyer wrote in August that in July the fence was damaged by Syrian army fire, a Russian drone briefly wandered across the border, and Israel responded to stray mortar rounds. Iranian Gen. Muhammad Reza Naqdi, commander of the Basij paid a visit to Quneitra. “There were also reports of Israeli bulldozers operating in the demilitarized zone east of the technical fence, in the area between Ein Zivan and Quneitra,” Spyer wrote. In November of 2016 Israeli forces clashed briefly with ISIS, killing a “number of ISIS fighters.” 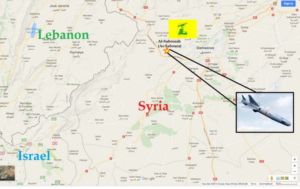 In February of 2016 a convoy transporting Hezbollah-bound weapons was hit while making its way through Qatifa near Damascus. Two “air to surface” missiles hit the area. According to one report the missiles struck near a Syria army Brigade 155 post in Qalamoun. This was near an area that had also been targeted in October and December 2015 and January 2016.

The Jerusalem Post noted: “According to reports, one of the targets was an arms convoy belonging to Hezbollah on the Damascus-Beirut highway, and the other was a Syrian Army site in Damascus. Continued from Page 1 The London-based Rai al-Youm newspaper reported that Israel struck an arsenal belonging to the Syrian Army’s Fourth Battalion.”

Is the window “closing” on Israel’s ability to strike at Hezbollah in Syria? The Russians have paid lip-service to the claim that Hezbollah will leave Syria when the war ends. In addition Israelis have been expressing concern to the Americans and Russians about Iran’s presence in Syria. Currently the attempt by Syria to use anti-aircraft missiles is not unprecedented and it doesn’t represent an escalation that could draw in Russia. But it symbolizes that the regime seeks to defend its airspace actively. The regime would like Russia to stand by it in such a defense. If the regime seeks to shield Hezbollah convoys more in coming months that could create an escalation. It will also not bode well for when the Syrian army seeks to re-assert its power along the Golan. A Syrian offensive in the south would involve Hezbollah and Shia militias backed by Iran, all of which threatens Israel.

Israel’s decision to strike deeper in Syria, allegedly near Palmyra, also represents a change in tactics. Previously strikes targeted areas around Damascus and it was not clear to what degree Israeli aircraft would have to penetrate deeply into Syrian airspace to carry out air to surface missile strikes. Airstrikes deeper in Syria create a different need to avoid Syrian air defenses and ensure the “de-confliction” discussions with Russia are iron-clad.

Both the Syrian rebels and Hezbollah may have an interest in seeing Israel dragged into fighting along the Golan. Hezbollah because it could hide behind a Syrian and Russian air defense umbrella to strike at Israel, and the rebels because they could hide behind an Israeli fear of Hezbollah and Iran to convince Israel to increasingly support them along the Golan. For now Assad has other issues to deal with, such as the terrorists trying to strike at Damascus and the war on ISIS and the rebellion.