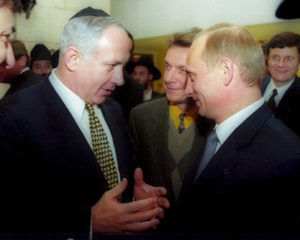 Benjamin Netanyahu recently traveled to Moscow to meet with Russian President Valdimir Putin, again. Having dodged a bullet with the election of Donald Trump, Netanyahu is now concerned with the Iranian presence in Syria after the Syrian Civil War subsides.

Hezbollah has long said that after it defeats the Sunni invaders of Syria, the anti-Assad forces, it will turn its attention to the Jewish State. Iran has other militias in Iraq and Syria as well. It is unacceptable for Israel to allow them to operated so close to their borders.

“Of course, in the past year, there was significant progress in the fight against the radical Sunni Islamic terrorism led by Daesh and al-Qaida,” Netanyahu said, using the Arabic acronym Daesh to refer to the Islamic State group. “Russia has made a very important contribution. Naturally, we do not want this terrorism to be replaced by the radical Shiite Islamic terrorism led by Iran,” Netanyahu said in Moscow, reports Associated Press.

“The threat of radical Shiite Islam threatens us no less than it does the region and the peace of the world, and I know that we are partners in the desire to prevent any kind of victory by radical Islam of any sort,” Netanyahu added in his conversation with Putin.

For its part, Moscow denied giving Israel a green light to attack Hezbollah, “It has nothing to do with reality, “It hasn’t been discussed, and there is no talk about it,” said Kremlin spokesman, Dmitry Peskov.