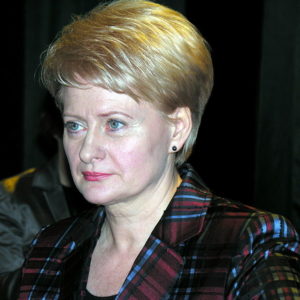 The Lithuanian President gave her ‘expectations’ to U.S. Vice President, Mike Pence, at the Munich Security Conference regarding air defense of the Baltic States. Dalia Grybauskaite came very prepared for the meeting.

“I spoke very specifically about what we expect from NATO. We see that the Warsaw decisions are no longer sufficient. (…) It is also crucial to consider that NATO and US forces are largely focused in Western Europe rather than the riskiest Eastern borders,” the Lithuanian president said in a telephone interview to BNS from Munich, reported The Baltic Times.

“Without air defense systems of the United States, we will not be able to ensure full contingency. For now, we intend to purchase some of the measures ourselves, however, direct US participation is necessary. We presented our position,” she noted.

“We had brought along materials, maps and truly hope that our message went through and will be accepted as a positive proposal, which NATO and the United States need.”

It seems the ‘expectations’ of the president of Lithuania need to be taken in the context that Lithuania does not spend the recommended 2% of its GDP on its own defense. Perhaps that should be a first step to rectifying the Baltic defensive situation.

Lithuania does not have long-range air defense systems of their own but have recently spent approximately $100 million euros on Norwegian medium-range systems that should be in place by 2020. President Grybauskaite said she also understood American concerns over defense spending.

“The United States have a full right of demanding that Europeans should themselves spend more on defense and also invest more in their defense,” said the Lithuanian leader.

“They restated that they do not refuse solidarity, help or take their share of responsibility for the world and European security. But we understand well that, with the new threats and increased activity of Russian actions along with our border – we see how much Russia invests in its army and how aggressive its behavior is – I believe it would be entirely irresponsible to avoid responsibility for our own security and investment in our own security. It would be a big mistake for us all, which would be never be justified historically,” she added.