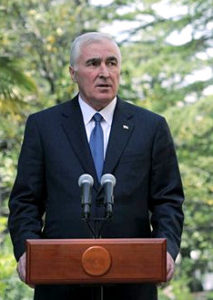 The Russian recognized, separatist region of Georgia, known as South Ossetia, celebrated its 8th year of independence from Georgia this week on Aug 26th. The region had been contested since the fall of the Soviet Union in the early 1990s and a second war was fought, this time between Georgia and Russia, over the territory in 2008. After defeating the Georgian armed forces, Russia stationed troops in the region. Russia claims Georgia was the aggressor; Georgia and the international community disagree. Representatives from the separatist regions of East Ukraine attended along with officials from Moscow.

“We are obliged to remember what price we have paid for the victory,” South Ossetian President Leonid Tibilov said. “Hundreds of the best sons and daughters of South Ossetia sacrificed their lives to have freedom and independence. We will always remember their names. We will remember and pay tribute to the Russian servicemen who died fighting for our freedom, independence and for all of us,” reports Russian state news agency TASS.

The important political decision taken by the Russian leadership gave South Ossetia an opportunity to receive significant support for the post-war reconstruction, Tibilov said.
“This allowed us to achieve great success in restoring our ruined economy and the country’s social sphere,” he said. Over the past eight years, thousands of houses, schools, hospitals and sports facilities have been built in the republic, Tibilov said. Hundreds of kilometers of highways, utility lines and dozens of new bridges have been constructed. “Soon large-scale works to ensure gas supply for the entire republic will start,” he added.

All conditions for the steady development of South Ossetia have been created, Tibilov stressed. “First of all, this is the guarantee of the republic’s state security, territorial integrity and inviolability of its borders, and the comprehensive assistance of our fraternal country Russia,” reported TASS. 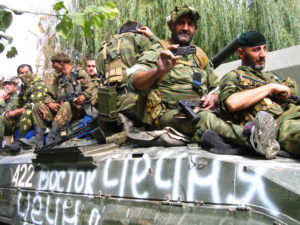 The Police Chief Battling Criminals From Russia And Ukraine