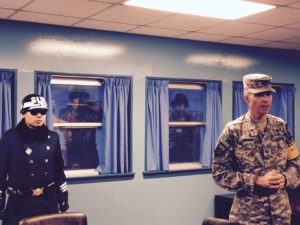 Russia warned the United States on Monday about a unilateral strike on North Korea. Foreign Minister Lavrov made Moscow’s feeling know about military action against its client state. American Vice President Pence visited the Demilitarized Zone between North and South Korea and said the “era of strategic patience is over.”

“This is a very risky path,” Russian Foreign Minister Sergei Lavrov said at a news conference in Moscow.

“We do not accept the reckless nuclear missile actions of Pyongyang that breach UN resolutions, but that does not mean that you can break international law,” he said.

“I hope that there will not be any unilateral actions like the one we saw recently in Syria,” reported AFP.

The White House has refused to comment on a possible military strike on the North with President Trump only saying that Kim Jong-un needed to ‘behave.’ There is widespread speculation that American intelligence services disrupted the recent launch attempt by the North where a rocket was destroyed shortly after takeoff. The Trump administration has done nothing to dispel that notion. Tensions on the Korean Peninsula are high as the North vowed today to conduct a rocket launch every week for the foreseeable future on its way to becoming an nuclear power.