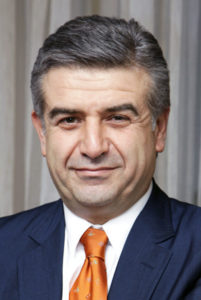 Following weeks of civil discontent over a hostage crisis that highlighted official incompetence in the eyes of the public, Armenian President Serzh Sarkisian appointed a pro-Russian executive as prime minister.

“The president signed a decree on the appointment of Karen Karapetyan on Tuesday morning,” Sargsyan’s office said in a statement, AFP reported.

Karapetyan is widely seen as a technocrat that favors Moscow and a Kremlin supporter. He has held former positions in the Armenian Gazprom subsidiary and Gazprom Bank, headquartered in Moscow.

“Karapetyan is widely perceived in Armenia as Russia’s protege,” political analyst Stefan Safaryan told AFP. “He is a player on Russia’s field.”

Armenai has become heavily militarized recently with Russian armaments after the Turkish coup attempt and the festering of the ongoing conflict with Azerbaijan over the disputed Nagorno-Karabak region.

In Ukraine’s Capital, A New Show Of Force