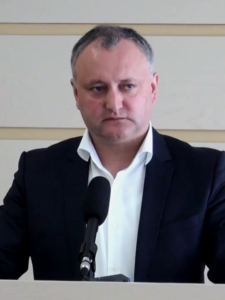 Moldova’s new pro-Russian president met with Russian Vladimir Putin today in Moscow and reaffirmed his intention to strengthen ties with the Kremlin, calling the relationship critical to Moldova’s survival. This marks a dramatic shift from the previous government’s pro-Western stance.

This means a probable break up with the European Union, and past agreements that have been signed. “I don’t rule out that after the next parliamentary polls, the parliamentary majority’s position would be in favor of revoking this agreement. And I will support such position,”

“We have lost the Russian market, and, strange as might seem, our exports to the European Union have dropped too. We have gained nothing from this agreement.”

“The issue of migration was also discussed. We hope solutions for our citizens will be found soon.”

Trade policy was also discussed. “Today we have discussed these details, we will seek solutions. But fundamentally we have agreed that in the coming weeks another group of Russian experts will arrive in Moldova. And directly under our supervision, I mean the presidential administration, the list of companies that supply their products to the Russian market, will be significantly expanded. It is very important.”

“As for commerce, at the best of times 80% of products of Moldovan agricultural sector were exported to the Russian market. After signing of the free trade zone agreement, since August 2014, we have already lost 50% of exports. We started to solve the problem at the early of 2015. We opened, for example, our enterprises in Gagauzia (autonomous territory in Moldova – TASS), they are now able to supply products to the Russian market. We began to launch other businesses on the rest of the territory of Moldova, several dozens of them,” Dodon said.

“We have not found a comprehensive solution to this problem. The ideal option is to return to the regime of free trade, which was prior to the signing of the Association Agreement with the EU, but the Russian party has rightly said that there is a risk of re-export,” he said.

VIDEO: Putin Trump Allegations Ridiculous And Says Our Prostitutes Are The Best In The World