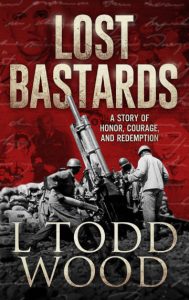 LOST BASTARDS – GET YOUR SIGNED COPY BEFORE THE MOVIE COMES OUT!

Growing up in the 60’s and 70’s the Korean Conflict was the most challenging aspect of American history to understand, even with a father who was a decorated veteran of that conflict. Father would not infrequently reminisce about his buddies with him there, yet was not detailed or talkative about battles or events he witnessed in other Korean locales. Now my dad is gone, yet a growing bond and understanding of his past are becoming tangible as I let the lessons of LOST BASTARDS sink in.

A top secret operation on Hill 433, in what is now and still the Demilitarized Zone, is finally presented to the American public with Mr. Wood’s tale of 28 brave men, purposely cut off from all contact with other American forces while they battled an onslaught by the Chinese Military. Tested by hardship and bolstered by a lack of self-pity, half of the so-called “Lost Bastards” paid the ultimate sacrifice leaving the other fourteen to quietly return to traditional American life, although they were not able to divulge the reason behind their then secret mission.

Perhaps as the Korean Conflict has never been fully resolved at the time of this review; perhaps as Korea, North and South, has now entered the international spotlight with lots of Poker-like action behind the scenes, leaving most of us to guess, speculate and conjecture what will happen next, the story of LOST BASTARDS is more timely and more riveting than ever. The dialogue is fast, realistic, unembellished and compelling. The story of those exemplary Americans led by U.S. Army Major Richard L. “Dick” Carpenter is a written and living monument to all who perished or survived the Battle of the Kimsong River aided by the ROK Capital Division, completely hedged in on all sides by the enemy.

Carpenter’s family life and that of his German wife with Romani roots, make for a genealogically captivating sub-plot which heightens the human aspect of unparalleled sacrifice, duty, honor and resolve against all odds that his men and he demonstrated. Our military has profited immensely from the technology that the troops on Hill 433 tested placing this story squarely in the annals of American Military History.

Book Review: The Worlds Most Dangerous Place: Inside The Outlaw State Of Somalia