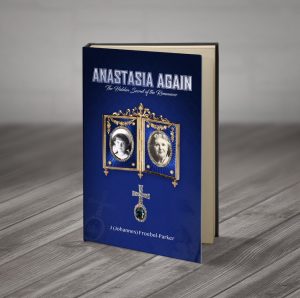 Did Anastasia Make It Out Alive? Tsarizm To Release New Evidence

Since the day that a monastery representative approached this author with a box of paintings and artwork purportedly created by a “misguided woman” who had claimed to be a princess, indeed a Grand Duchess of Russia, Anastasia Romanov, an odd sort of cognitive dissonance began to nag at conscience: had Anastasia never been found? Had she really died in the “House of Special Purpose,” that is the Ipatiev House in Yektarineburg, Russia in the night of July 16/17, 1918? Had she survived somewhat in the vein of Ingrid Bergman’s famous interpretation? Had not the infamous case of Anna Anderson put the whole mystery to bed once and for all? Certainly, this author was being told that there was no doubt she had died in 1918, end of story, period at end of the sentence; the curtain falls.

Having encountered surprise facets to personages in my own Ahnentafel by the time of the offer to purchase pieces of art from the collection of aka “Evgenia/Eugenia Smetisko” I was willing to reserve judgment and not accept that any such pronouncement of “fact” was indeed sacrosanct. Immediately it appeared rather peculiar that a “fraud,” an “impostress,” a so-called mountebank would request to be buried in an Orthodox Christian cemetery, especially one attached to a Russian Orthodox Monastery and Seminary. It did not make sense to me that a “fake” would leave precious Romanov and Romanov era objets d’art to a nascent museum of Russian History and Culture at said monastery. Later, an even more puzzling fact emerged that this “identity-challenged” woman had made an arrangement in her will that a sizable annuity in perpetuity would eternally help fund the museum. Certainly, if the woman called “Evgenia” were deranged and/or simply “enjoying a fantasy” it defied logic that she would then somehow amass assets only to leave them altruistically to a religious institution. It seemed that there were two identities living in the same human form: one acting exactly as one would expect of a grand duchess and one distancing herself from the identity of the grand duchess as the alleged wife of a purported husband, Marijan Smetisko. In 1963 the Croat admitted to Life Magazine that he had never known her moreover was not married to her. Goethe’s poem about “two souls living within the same breast” immediately came to mind (Zwei Seelen wohnen, ach! in meiner Brust…).

For over a decade the mystery continued to occupy the researcher’s mind while “the lady’s” delicate paintings and embroideries enchanted the eye. The subtext of the differences of assumptions of the American forensic team (under the leadership of the late William Maple) and those of the Russian contingent was that there was NO DEFINITIVE answer to the mystery. Indeed, both teams had examined extant remains purported to be some if not most of the Romanov retinue that night of deranged murder and come to a pivotal difference of opinion: the Americans insisted that Maria had been found and that Anastasia was missing, while the Russians asserted the converse finding.

Subsequent visits to the cemetery in question proved fruitful when the Cyrillic script emerged understandable as “EVGENIA SMETISKO.” What was inscribed under the name added more intrigue. Indeed, the “impostress” had been entombed with the date of birth of Anastasia Nicholaevna Romanova- June 18, 1901. ve?

ANASTASIA AGAIN: The Hidden Secret of the Romanovs (Ice Box Media, publisher) was written as a vehicle to share insights gathered over years and endless hours of discovery with those readers who believe that the mystery of the Romanovs has yet to give up its last ghosts. Gleanings from research and the employment of new technologies of visual facial recognition accompany a study of aka “Evgenia’s” own words polished and reformulated by J (Johannes) Froebel-Parker from the original 1963 “autobiography” she penned for Robert Speller with the author’s research notes inserted. Readers from around the world will again wonder if they know the full story of the mystery of the Romanovs. Perhaps aka “Evgenia” will again rise from her grave in a kind of anastasis/ ἀνάστασις (resurrection) to be reinterred with those whom she once loved in life as Anastasia.