The explosion that rocked Chabahar on December 6

Chabahar is a city on Iran’s Makran Coast of the Sistan and Baluchestan province of Iran. It is an important port city with the Shahid Beheshti port and is officially designated as a Free Trade and Industrial Zone. Due to this status, the urban area has increased in significance in international trade. The region’s demographics are primarily made up of Baluch people who speak the Baluchi language and are 99 percent Sunni Muslims.

On Thursday, December 6th, a suicide truck driver approached Chabahar’s Police headquarters and detonated himself outside. At the same time, several other armed attackers began firing. The attack left at least 29 dead and injured. The two perpetrators were killed and a few civilians were wounded. The Ansar al-Furqan group claimed responsibility for the attack.

Javad Zarif, Foreign Minister of Iran posted a tweet claiming that “Foreign-backed terrorists kill & wound innocents in Chabahar. As we’ve made clear in the past, such crimes won’t go unpunished: In 2010, our security services intercepted & captured extremists en route from UAE. Mark my words: Iran WILL bring terrorists & their masters to justice.” 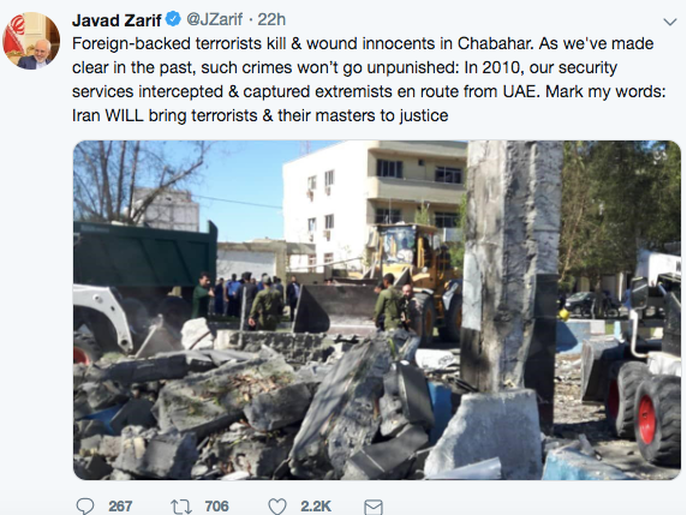 Who are the Ansar al-Furqan and why attacked Chabahar?

Most of its operations were in the southern province of Sistan and Baluchistan, in the Qasrqand and Chabahar areas. It’s activities were concentrated on Chabahar specifically where its members had safe houses. But last June, one of Ansar al-Furqan’s homes was targeted by security forces and several of them were killed and arrested. In that operation, one of Iranian intelligence agent was also killed.

About three years ago, their leader, Hisham Azizi, (nicknamed Abu Hafaz El Baluchi) was killed. In the wake of his death they selected Maulavi Jalil Qanbarzai as the leader. He was one of Abdulmalek Rigi’s old friends from the Jondallah group. He was also killed in a large-scale IRGC operation in Qasr-e-Kand district last June. 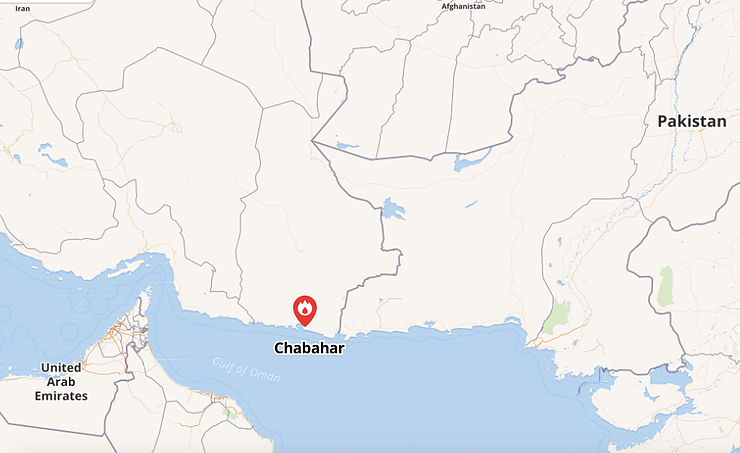 Location of Chabahar showing Pakistan and Iran and the vicinity

Ansar al-Furqan is considered to be the most active militant group after Jaish Al-Adl.

Which countries are supporting Ansar Al-Furqan?
Pakistan and several Arab countries have been accused of supporting Jaish al-Adl or Ansar al-Furqan groups. Many of these groups are present in Pakistani. Some analysts consider these events as part of a proxy war between Iran and regional rivals, especially the Sunni countries and their allies, including Pakistan. In the province of Sistan and Baluchistan in the last month, 12 border guards were taken hostage and taken to Pakistan. Five of them were released, and seven are still in captivity. The five who were released were handed over to the Pakistani army, and the Pakistani army also handed them to Iran.

Officials in Tehran believe that there is a relationship between the Pakistani army and these groups in Pakistan. This comes in the context of accusations that elements in the Pakistan security apparatus have supported or worked with other extremist groups over the years, such as those targeting Afghanistan, including the Taliban, and also those active in Kashmir and India.

Why was the port of Chabahar the target of this attack? The attack on the port might be important due to its relevance for Iran evading renewed US sanctions. The port has special status. If we look at the attack from the point of view of the opposition between the Islamic Republic and some of the countries in the region, it should be noted that the Balochistan Liberation Army attacked the interests of Pakistan and China in Karachi two weeks ago in November, targeting the Chinese consulate in Karachi. Iran has been accused of sheltering some members of the group. Two of them were assassinated last year in Chabahar. The fact is that a number of members of this group are present in Sistan and Baluchestan, amid the December 6 attack, may have been a response.

However the issues that exist in Sistan and Baluchistan province are root problems of a larger conflict between minorities and the regime and have different dimensions. At least two of these are internal and relate to the military and discriminatory treatment by the security forces of the Islamic Republic in Sistan and Balouchistan against the Baloch people. This has bolstered the recruitment of militant groups such as Ansar al-Furqan and Jaish al-Adl and fuels their continued operations.

Baluchistan has among the highest rates of poverty, unemployment and illiteracy in Iran, and the same applies to the number of executions. These issues have also fueled the crisis. There are a series of internal divisions that exist in the Iran and policies against the Baloch minority.

This kind of pressure on people lead to reactions. We can associate this violence with the issue of the lack of development of the region and the pressures and discrimination that exist there.

The Truth Hurts In Brazil