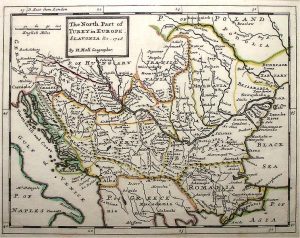 “Europe is now dead in Bosnia and buried in Syria”.

The recent visit of Turkish President Recep Erdogan to Bosnia has deepened polemics with the West. It is not only the economic presence of Turkey in the Balkans that worries the EU; they also are very concerned about Turkish political influence, as a counterpart to Brussels.

Turkey considers the Balkans as part of its natural sphere of influence, as a former imperialist power during the period of the Ottoman Empire. Under Erdogan’s leadership, Turkey has made significant efforts to develop a greater political, economic, and cultural influence in the Western Balkans. Besides economic aid consisting of big infrastructure projects, its political reach is exercising pressure in the region, almost ordering the Western Balkan member countries to take measures against Erdogan’s opponent Gylen and his supporters.

At a time when many EU nations had prohibited Erdogan’s political rallies during his last electoral campaign, he managed last week to organize successfully such a rally in Bosnia, on the eve of Turkish parliamentary and presidential elections, in front of 20,000 Turkish residents living abroad who travelled to Bosnia to show their support for the Turkish strongman. The Turkish President was accompanied by Alija Izetbegovic, who represents Muslims in the Bosnian triple presidency.

Through this uniquely Turkish gathering of such large size in a foreign country, Erdogan addressed 3 million Turkish people living abroad, hoping his speech would have great influence on the final election outcome.

“At a time when the glorious European countries that pretend to be the cradle of democracy have failed, BiH made it possible for us to gather, witnessing real democracy by deeds, not just words,” stated Erdogan. He added there are more Bosnian people living in Turkey than in BiH, as well as Albanians. He quantified Turkish investments in BiH that as reaching 50 million USD and promised another 25 million in the near future that will strengthen the economic ties between the two countries.

Erdogan also declared that Europe is dead in Bosnia and buried in Syria, opposing openly the EU and US. Analysts maintain that Erdogan’s visit will bring a strategic element to BiH, to its detriment, and that by spreading electoral propaganda, he is dividing the country.

Brussels portal “Politico” addressed Erdogan’s last move as Turkey’s increasing influence in the Western Balkans, at a time when the EU is worried more about Moscow’s role in the region. Actually, Europe needs to take both countries’ policies in consideration. Recently, during the 22nd International Economic Forum in Saint Petersburg, Putin mentioned again the official decision of Ankara to purchase the S-400 air-defence System from Russia, though being a NATO member, calling it the most developed and the best system in the world. “Does it consist a crime?”, asked Putin, referring to the USA’s extreme behaviour to block the selling of the F-35 to Turkey, due to the purchase of the Russian antiaircraft system. The situation is just aggravating and now it seems the war is waged on three fronts.

Why Was A Yazidi Genocide Bill Voted Down In Israel’s Knesset?