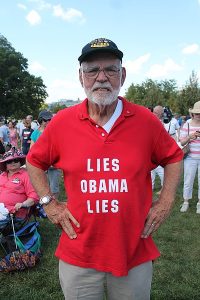 Have you ever tried to get someone to explain the Iran Deal? “Without the deal there will be war.” No, I didn’t mean explain what happens without it. I mean, can you really explain the Iran deal? Why do we need it? “Because without it there will be war”? Will there, though? You’re not really explaining the deal, you’re just telling me something else to start a new conversation so that I’ll be stuck in a circle of “well, you don’t want war do you? So you must support the deal.”

Let’s say this kind of “deal” was explained in another context. If a real estate agent told you “if you don’t sign this contract you’ll have to get in a fist fight.” If someone told you that, you’d immediately wonder what kind of contract this is. Is it like the contract in the Godfather? If you don’t sign, bad things will happen.

Remember that line: “Luca Brasi held a gun to his head, and my father assured him that either his brains or his signature would be on the contract.”

That’s what it is technically. Who signed it? “It is an international agreement on the nuclear program of Iran reached in Vienna on 14 July 2015 between Iran, the P5+1 (the five permanent members of the United Nations Security Council—China, France, Russia, United Kingdom, United States—plus Germany), and the European Union.”

But what is it? Why do we need it?

“Well, without it there will be war.” Of course.

Now that the Trump administration is threatening to change the deal we are hearing the chorus about war again. France’s Macron warned of war on May 7 if there was no deal. “We would open the Pandora’s box. There could be war.” On May 6 the UN secretary general Antonio Guterres urged Trump not to walk away from the deal, warning that there was a real risk of war” if the Iran deal is not saved.

Everyone seems to have the same talking point. “America’s anticipated repudiation of the Iran Nuclear Deal would set the US on a direct path leading to war with Iran.”

“Wake Up and Stop the Madness of a War With Iran”

Or another narrative: “Netanyahu wants America to go to war again.”

One man asks: “Do you want to go to war with Iran for Israel? Or do you just want to change the Iran deal?” Rula Jebreal: The problem is the international community will not follow him. If Israel will push him into war with Iran… the consequences will be devastating for U.S.

These are the talking points. No deal = war

But why is “war” the only alternative to the Iran deal?

Obama claimed the deal was a step toward preventing Iran from obtaining a nuclear weapon.

But Iran said that it was never seeking to develop nuclear weapons. It was only working on peaceful nuclear energy.

So something doesn’t make sense.

Screen Shot
Well, which is it? Peaceful or not?

If Iran was only seeking peaceful nuclear enrichment, as commentators and Iran’s leaders suggested in 2013, then why would there be any need for a deal to prevent them doing something they don’t want to do? The Washington Post wrote in 2013 that “Iran says its nuclear activities are peaceful, but a lot of countries worry that they’re cover for a nuclear weapons program. The dispute, on the most basic level, is over what sort of nuclear program Iran gets to have — if any at all — and what happens if it defies the world’s demands.”

And wait, there’s more: “Western intelligence agencies have not concluded that Iran has decided to definitely build a bomb….The United Nations’ nuclear watchdog hasn’t definitively concluded that Iran is doing this, but it has reported some very worrying signs and says it can’t state confidently that the program is peaceful.”

So, Iran just wants a peaceful nuclear program. That’s what Iran says. So why is there a need for a “deal”? The “deal” came about because sanctions were applied to Iran. But why not just stop the sanctions? Why create a “deal” that then gives Iran the power and stamp of approval to do what it wants after a certain number of years or to continuously threaten the West during the time of the “deal”? Iran threatens “historic regret” if the US pulls out.

Wouldn’t it be better to just not have a deal? The deal gives Iran all the power. It gives Iran everything it wants, and somehow gives its program legitimacy.

So if Iran just wants peaceful nuclear energy, then why not call it’s “peaceful” bluff and say “ok, we don’t need a deal.” The deal actually created the context for Iran to then “punish” the US by developing nuclear weapons to make it “regret” leaving the deal.

This is what makes the deal to strange. There was nothing in it for any country, except Iran. Iran wanted a deal. It didn’t want sanctions to simply end, because it wanted this “deal” to give it a “right” to nuclear weapons after. It also wanted to be able to make threats the entire time. If Iran simply didn’t have a deal then it wouldn’t be able to so easily leave the NPT because it would be violating its own promises of “peaceful” nuclear energy. But now it can say it must leave the NPT and build nuclear weapons because the US left the “deal.”

So what is the Iran deal?

It can only be explained if you lie. You have to lie about the nature of Iran’s claims. Iran claims it wants a peaceful program. So then there is no need for a deal. Iran actually wants a deal because then its peaceful program gets legitimacy and its weapons program will eventually become legitimate as well.

Why is “war” the alternative to a deal? How did Iran convince western leaders to believe this? War was never the alternative. The alternative was to simply not have a deal and see what Iran does. Iran quietly whispers “war, war, war” to its allies in the West who then tell the public “we need a deal or there will be war.”

What kind of “deal” is done to prevent a country threatening “war” in the absence of a deal?

The Iran deal cannot be explained except from the context of Iran’s agenda. It has no logic on its own merits.

Then we don’t need to hear about “war”

Then we don’t need a deal.

If Iran actually is lying and wants a nuclear weapons program, then a deal and threats of war won’t help.