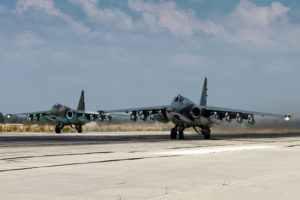 US military officials believe Russia aircraft, operating out of Syria in June, purposefully bombed a secret US facility in Syrian territory near the Jordanian border. The Wall Street Journal reports that Russia took the action against the base, that sometimes housed secret American and British forces, in order to pressure the White House to coordinate actions with Russia in the Syrian theater. The Obama administration complied with Russia’s wishes after the strike which killed four American supported rebels. A contingent of British special forces had recently left the facility the day before. The base is used to prevent Islamic State fighters from infiltrating via Jordan to enter the fight against the U.S. coalition.

The Russians gave conflicting excuses for the attack which was in an area they had not operated in before. Several iterations of explanations were found to be inaccurate.

Russia has long wanted the legitimacy of operating in a coordinated effort with Western countries in Syria. Despite the fact that some Western forces could have been killed and the bombing dampened relations between Russia and the Pentagon and CIA, the White House and State Department still pursued a compromise. However, officials in the Pentagon and CIA contend that Washington bowed to Moscow in the deal and believe that the U.S. needs to confront Russia, reports Fox News. The Obama administration’s strategy in the region, or lack of one, seems to be to punt the conflict to the next president and to not get involved in any skirmishes during the last six months of Obama’s presidency. Unfortunately this projects weakness to our adversaries which they are taking advantage of around the world.