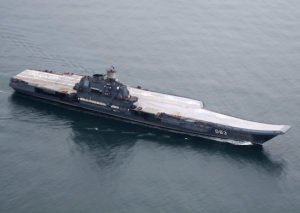 In a bid to match U.S. naval power projection capability, Russia is sending the accident prone aircraft carrier, Admiral Kuznetsov, to the Mediterranean to allow combat operations in the Syrian theater. This would be the first time that a Russian aircraft carrier would be engaged in combat.

The ship has a long history of embarrassing breakdowns and the Kremlin left some wiggle room to reverse the deployment if things don’t work out as planned; only one anonymous source is quoted in the Russian media discussing the reported deployment. In its last deployment to the Med several years ago, American ships stalked the carrier, apparently afraid it might sink due to poor maintenance and routine severe accidents.

The carrier only has about fifteen aircraft aboard, far fewer than its US counterparts; however, the ship also had a guided anti-ship missile mission emphasized in its initial design.

The Mediterranean is about to become very crowded with the large U.S. Navy force already in place.

American Versus Russian Jets – Who Would Win?

US Military Squad Training In Estonia