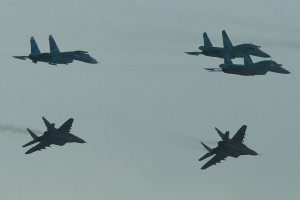 The Russian Defense Ministry is introducing new methods of combat training based on the experience gained in Syria, Defense Minister Sergey Shoigu said on Friday.
“Modern military conflicts are very brief. Decisions to create and prepare various groups of troops are made within tight deadlines. In view of these peculiarities and the experience gained in Syria the armed forces are introducing new forms and methods of combat training,” he said.
Shoigu recalled that last winter’s checks indicated that the level of combat training had been up by 65 as compared with the same period last year.
According to the minister, combat potential of Russia’s armed forces over the past three years has grown.
“Over the past three years the combat potential of the Armed Forces has been up 32%. The state defense contract has nearly doubled. Since 2013 the troops have received more than 15,000 pieces of new or upgraded military hardware,” he said.

At the moment the share of cutting-edge equipment in the Russian Armed Forces is above 47%, he added.
The Russian Armed Forces have increased the intensity of their drills threefold since 2013, he said.
“The intensity of annual practical measures has risen threefold and the number of servicemen involved in strategic exercises has increased tenfold,” Shoigu said.
For the first time in many years, 53 federal executive bodies and their subordinate structures have taken part in strategic exercises, including 49 federal ministries, services and agencies, and also four state corporations and organizations, the defense minister said.
“Combat training individual indicators, such as aircraft total flying hours and the seamanship of warship crews have increased more than twofold,” Shoigu said.
According to the Russian defense minister, the combat raining efficiency has increased after Russia re-equipped 35 existing and established 27 new practice ranges.
Also, the Russian troops’ provision with modern technical training aids has grown by 2.5 times, the defense minister said.

Russia To Finland: We Will Respond To Baltic NATO Activiey