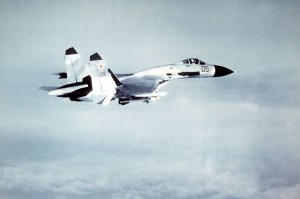 A Russian SU-27 fighter jet came within 20 feet of a U.S. RC-135 reconnaissance aircraft over the Black Sea recently. In a dangerous maneuver, the SU-27 came very close to the American plane and then executed a violent ‘wingover’ that injected its thrust into the RC-135’s engines, causing the American plane to become less controllable.

“On Jan. 25 an RC-135 aircraft flying a routine route in international airspace over the Black Sea was intercepted by a Russian Su-27 in an unsafe and unprofessional manner,” Navy Capt. Daniel Hernandez, chief spokesman for the U.S. European Command, told the Washington Free Beacon. “We are looking into the issue.”

The RC-135 was flying thirty miles off the Russian coast, well within international airspace. There have been multiple aggressive Russian intercepts of U.S. intelligence collection platforms in the past year. In addition, there have been threatening fly-overs of American ships in the region. 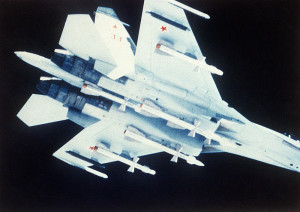 “Much of what Russia is doing today is aimed at generating fear of Russian military power and the possibility of war,” said former Pentagon Russia expert Mark Schneider, reported the Washington Free Beacon.

“That is broadcast on a daily basis in the state media and through Russian military actions,” Schneider added. “Provocations involving aircraft are now common place. Russia also tends to be paranoid concerning foreign espionage and the protection of state secrets.”

The Upside Of A Weak Ruble

Images: Dog Rescued From Being Frozen On Siberian Lake