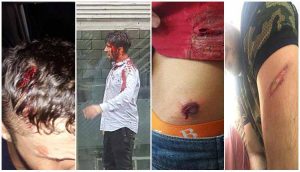 The peaceful protesters were met with fully equipped riot police who shot pellets and tear gas at the crowds. Footage from Tehran shows police brutally beating protesters with batons. A large number of demonstrators have been detained in the ongoing protests. We are very concerned for those who are detained as the Iranian government is notorious for torturing and even killing protesters in detention as was the case in the December/January protests at the beginning of this year.

Top Iranian officials have also taken turns threatening protesters. On Tuesday, June 26, Tehran Prosecutor Jafari Dolat Abadi said that government officials would in no way be lenient in dealing with riots and unrest and added that “the elements behind the unrest were identified and that a large number of these people were arrested”.

Sadegh Larijani, the chief henchman of the clerical regime’s judiciary, on June 26, and in fear of spreading these protests, threatened the perpetrators of the “riots” of Tehran and “disrupters in the economic system” with decisive action and execution, and said, “These acts have severe penalties as a disruption to the economic system of the country under the law of disturbing the country’s economic system. It has been seen that, if this is a case of corruption, the execution would be carried out and, if not, it would be 20 years’ imprisonment.”

The target of this criminal mullah by referring to “those who disturb the economy of the country” is those protesters and strikers whose entire life has been destroyed by this regime. Meanwhile, the Iranian people’s capital has been plundered by Khamenei, the Revolutionary Guards, and other leaders and gangs of the regime, who have made the people’s lives miserable today.

At the same time, Abbas Jafari Dolatabadi, the Tehran criminal prosecutor, announced the arrest of a large number of protesters and decisive action against them, refusing to release them, saying: “Last night, a large number of rioters in the market were identified and arrested … These defendants, like the defendants in the January and March (2018) will not be released until their trial. The authorities will not give in in dealing with the riots and insecurities “(ISNA news agency – June 26).