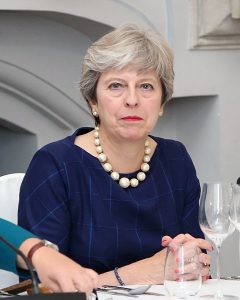 The British government may formally and publicly link the attempted murder by nerve gas attack against a former Russian double agent and his daughter to the Russian security services. “Theresa May is expected to say the UK believes Russia was behind the nerve agent attack in Salisbury in a statement to MPs, according to a senior Tory MP,” reports The Guardian. “The prime minister will give an update on the poisoning of the former Russian spy Sergei Skripal and his daughter, Yulia, in the Commons at about 4.30pm on Monday.”

As the Russian hysteria in the media grows even more shrill, the rhetoric in the U.K. seems to be ramping up. Cyber warfare, Syrian chemical weapons use, East Ukraine, Crimea, and this nerve gas attack in the middle of the United Kingdom, all add to the anti-Russian narrative. 21 people were hospitalized due to the recent exposure to the toxin.

Pressure is rising in Britain to enforce consequences on the Putin government for the incident. “So it’s clear that we have got the Russia government behaving certainly aggressively towards people in the United Kingdom, and even in quite a corrupting way,” declared Tom Tugendhat, who chairs the Commons foreign affairs committee, in an interview to the BBC.

“The “tell” – as it were – was the presence of certain chemicals which are believed to have been developed in a Russian laboratory. The announcement is expected to take place at 11 am during a meeting of May’s National Security Council. A formal charge against Moscow could be unveiled before the House of Commons could as early as this afternoon. May might even go as far as blaming Russian President Vladimir Putin personally for ordering the hit,” wrote Zero Hedge.

“In their report to Mrs May, The Sun has learned that MI5 and MI6 chiefs will cite the very rare substance used on ex-spy Sergei Skripal and daughter Yulia as key evidence of the Kremlin’s involvement. It is believed to have been developed in the SVR Russian foreign spy service’s notorious Yasenevo laboratory. Mrs May will then summon an emergency meeting of her National Security Council at 11 am to decide on the scale of Britain’s retaliation,” reported The Sun.

In addition, UK Foreign Secretary Boris Johnson expressed hope “the West does not stand idly by” if evidence is produced to confirm claims President Bashar al-Assad’s government launched a deadly chlorine gas attack in rebel-held eastern Ghouta, reported Sky News. Pressure is rising over alleged chemical weapons attacks in the Middle East by the Assad regime, who is supported by the Russian military.

Theresa May 'is set to blame Russia for the nerve gas attack' https://t.co/Cvuds6ldB7

The Kremlin denied involvement in the attack. “We’ve heard no statements from British politicians or officials Russia may be involved in this case somehow. We’ve seen various insinuations in the British media, which sometimes don’t boast objectivity at all,” Kremlin spokesman Dmitry Peskov said. In his opinion, “these reports should be taken for their real worth.”