Moscow cancelled Maslenitsa Festivities, which celebrate the last week before Lent and the upcoming long fast, due to the crash of a Saratove airlines flight shortly after take off from Domodedovo Airport, on the way to the Russian city of Omsk. 71 people on board ranging from age 5 to 79 were killed. There were no survivors.

The crash was caught on surveillance video shown below. 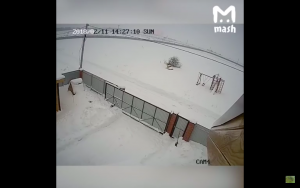 Witnesses, according to Sky News, said they saw a burning plane falling from the sky. One woman who lived nearby reportedly said: “I felt a shock wave… the windows shook.” Another witness told REN-TV that she “left the house, saw the plane, an explosion was heard and the sky turned red,” reported Sky News.

Radio stations across Moscow changed their daily programing to play only music the entire day.

“The United States is deeply saddened by the tragic deaths of those on board Saratov Airlines Flight 703. We send our condolences to the families of those who lost their lives and to the people of Russia,” White House Press Secretary Sarah Sanders said.

Russian state news agency TASS reported, “The flight data recorder was found in the 18th sector [of the search operation]. The Interstate Aviation Committee (IAC) is working to confirm and identify the device,” the said at a meeting of a working group of the government emergency response commission.

According to Poletykin, nine aircraft are used to inspect and clarify the boundaries of wreckage dispersal. “The search area is divided into 29 sectors, with a senior officer assigned to each of them,” he noted, adding that “the main efforts now focus on searching for the remains of the victims and collecting the plane’s wreckage,” wrote TASS.

Youngest victim of Russian air tragedy, 5, and her mother, 32, among 71 killed after plane crash https://t.co/CtV1BOGKpx pic.twitter.com/YK94soytST