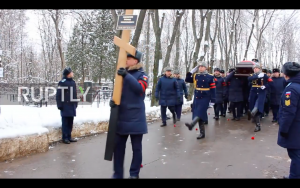 Local media reports over 30,000 people attended the funeral of Major Roman Filipov, who died after ejection over Syria, by detonating a hand grenade as he was attacked by Islamists on the ground.

Filipov was laid to rest at the Alley of Heroes in the city of Voronezh’s main cemetery.

As Islamist soldiers closed in on his position, after expending all his ammunition, Filipov yelled, “This one’s for the boys!” and detonated a hand grenade, killing himself.