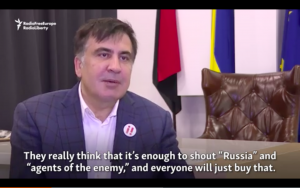 Opposition leader Mikheil Saakashvili, the former president of Georgia, and the former mayor of Odessa in Ukraine, has lost an appeal to allow him to stay in Ukraine, after his citizenship was revoked by Ukrainian President Petro Poroshenko. He is likely to be deported or extradited to Georgia to face corruption charges, which he says are politically motivated.

“This is yet another decision by (President Petro Poroshenko) and not by the court,” Saakashvili said in a post on Facebook after the verdict, reported Reuters.

His lawyer, Ruslan Chernolutsky, said the ruling would likely pave the way for Saakashvili’s departure from Ukraine.
“We all need to be prepared for the fact that the authorities in an illegal manner will take the decision on his compulsory deportation or possible extradition,” he said in a video posted by Saakashvili, wrote Reuters.

Saakashvili has been a fierce opponent of Poroshenko repeatedly calling for his impeachment due to alleged corruption. Saakashvili resigned from his post of mayor of Odessa saying he could not fight the enablement of corruption in his district by Kyiv.

It Was A Bomb