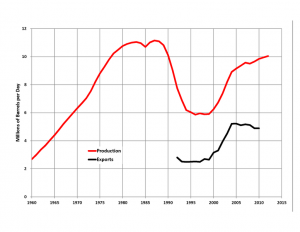 Russian Energy Minister Alexander Novak said Friday that Russia would discuss with Saudi Arabia and OPEC withdrawing from the crude oil production agreement that has been successful in reducing oversupply on international markets for crude, and has commensurately pushed oil prices higher. The discussions will happen at a committee meeting in Oman on January 21st.

“I don’t think anyone is going to stop us from discussing these issues, and we will be able to discuss them in terms of the mechanisms which can be considered,” said Novak, reported Reuters.

The Kremlin is facing pressure from Russian oil producers who are beginning to complain the production limits are hurting their business.

“The head of one of Russia’s largest oil producers, Lukoil (LKOH.MM), said earlier on Friday Russian should start exiting the oil pact if crude prices remain at $70 per barrel for more than six months,” wrote Reuters.

Moscow has been attempting to diversify its economy away from hydrocarbons but only with limited success. Hi-tech sectors like cryptocurrency have been a favorite of Russian President Putin.

The reliance on energy for state revenue and economic growth can bring prosperity in boom times but the reverse is true if prices collapse as they did several years ago. Russia is still attempting to recover from the depressed oil market and Western sanctions.

Miracle As Boy, 3, Survives By Walking Alone Across Taiga At -30C After Seeing Father Die